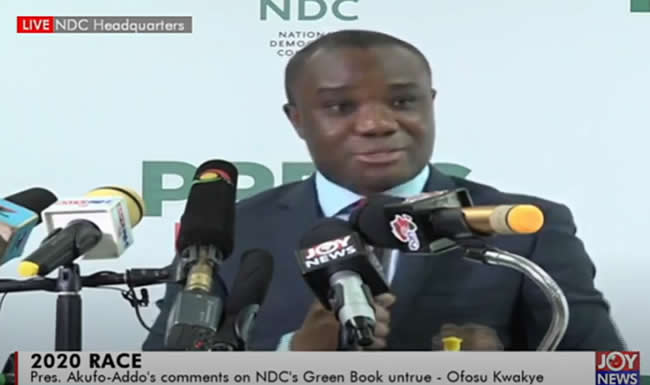 A former Deputy Minister of Information, Felix Kwakye Ofosu has described the Attorney-General, Mr. Godfred Dame as a ‘hatchet man’ for President Akufo-Addo in pursuit of political opponents.

Speaking in an interview with Evans Mensah on Top Story on Friday, Mr. Kwakye Ofosu indicated that, the recent suit by the Attorney-General against Dr. Cassiel Ato Forson for causing financial loss to the state, is a political scheme by the President.

According to him, the charges against Dr. Forson are only designed to gag him from speaking against the 1.75% E-levy Bill.

“This is nothing short of a cruel, callous witch hunt, deliberately embarked upon by an Attorney-General who has turned himself into a hatchet man, and is going after political opponents at will, for the pleasure of his boss the President. It is deliberately designed to silence Honourable Ato Forson, who has been a pillar in Parliament, and has been at the fore front of fighting against the e-levy, which many Ghanaians are opposed to.

He has also been at the fore front of exposing the maladministration, the malfeasance and corruption of this government. It is for that reason and that reason alone, that the Attorney-General is embarking on this comical, cruel which hunt”, Mr. Kwakye Ofosu said.

On December 23, the Attorney-General filed criminal charges against Dr. Ato Forson, a former Deputy Minister of Finance and two other persons for causing financial loss to the state. The charges were in relation to the procurement of 200 ambulances during the erstwhile Atta Mills and Mahama-led government.

According to the Attorney-General, Dr. Cassiel Ato Forson did not follow due processes and failed to secure due authorisation in procuring the ambulances. The AG also alleged that, Dr. Ato Forson was involved in the purchase of assets which were not fit for purpose.

But reacting to the charges by the Attorney-General, Mr. Kwakye Ofosu explained that the purchase of the ambulances received due approval from Parliament, Cabinet and the Public Procurement Authority. He added that appropriate legal advice from the then Attorney-General was sought in addition to authorisation for Letters of Credit to be established.

Responding to the claims of the ambulances not being fit for purpose, Mr. Kwakye Ofosu said, there were clauses in the contract that made room for such issues to be resolved, thus it is untenable for anybody to accuse Dr. Ato Forson of causing financial loss to the state.

“Indeed, the company involved itself offered to sit with officials to resolve any concerns they had regarding the quality of the ambulances. So if you don’t do that, and a loss is occasioned, that loss actually should be heaped at the doorstep of this government. They’re the ones who have refused in the last few years, to do what has to be done”, Felix Kwakye Ofosu explained.

Meanwhile, speaking at a press conference on Friday, the Ajumako-Enyan-Esiam MP, Dr. Cassiel Ato Forson, also dismissed the charges by the Attorney-General, describing them as an attempt to stop him from opposing the E-levy Bill. But according to him, no amount of intimidation can cower him into silence.

“The timing speaks volumes. After four years, government never felt the need to ask me for another statement until when I started raising issues on the 2022 Budget. My job as a fiscal economist is to look into government policy and advise same. I may oppose or support it. It clearly shows government thought it wise that this is the time for them to take me on to keep me quiet, but I won’t be quiet, I can’t be quiet”, Dr. Ato Forson reiterated.