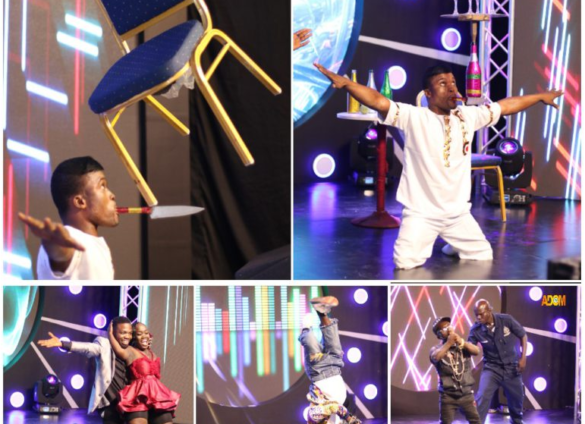 Expecting an eviction, The Big Talent Show contestants went above and beyond with their performances, in week 3, to land scores that would rate them up the ladder in the reality show.

Little did they know the eviction process has been shifted to next week but it was worth it because of the sparkling performances that got judges almost out of their seats.

Shatta Wifi, the first contestant for the night, rolled up the curtain performing a hit song from Backstreet Boys dubbed As Long As You Love Me. His singing and rapping were atop a slow-groove gesture that got many nodding their heads in appreciation.

Bie Gya took on the salsa wave. The judges commended her for being different and creative.

Church Heathen by Jamaican music star Shaggy was the song contestant Fred chose to perform this week. He gave off his religious dance moves but judges urged him to open up his creative book more.

Martha rocked patrons with some reggae-infused gospel songs. Judges applauded her for her performance.

Tapoli keeps showing how talented he is with how dynamic his performances are. His amateurish magic tricks amazed viewers that watched on after he made a missing lemon reappear in one of the bags in the crowd. As a magician for the night, the judges yearned for more from him.

C-Nortey got creative with his dancing-teacher status. In his classroom this week, all the students danced with him even as he whipped them.

He played the song Calling You by Aqua. His creativity was rated top-notch by judges. C-Nortey was lauded for his performance – which preached on the need to send children to school.

Size Two took the turn of a pompous deportee who was faking his life by smoking cigarettes in a public space. It took a police encounter to stop Size Two from keeping up with his unhealthy and fake lifestyle.

The adrenaline-packed performance will continue to linger in the memories of fans who watched Faith Power on the Big Talent Show last weekend. Everyone was amused at how he could arrange fragile objects on a knife while holding it up with his bare teeth.

Judges couldn’t hold back in their chairs when he pulled up a chair for the same stunt.

Nana Yaw was the third dancer for the night. He displayed some old school dance moves to carry on in the talent reality show.

Paul Gee didn’t do commentary this time so he opted for drama. He fell victim after wooing a woman only to find out later she was blind.

Ankaa Bako performed his own song and judges urged him on well. He was applauded for his appropriate costume and ability to lead the audience to sing along with him.

Short Prophet was the Rastafarian for the night. He proved his music prowess by shifting from his usual gospel genre to performing reggae tunes. His ‘fake’ dreadlocks synched well with his show.

See more photos from the event below:

DISCLAIMER: The Views, Comments, Opinions, Contributions and Statements made by Readers and Contributors on this platform do not necessarily represent the views or policy of Multimedia Group Limited.
Tags:
Adom TV
The Big Talent Show