The Black Stars 10: No 2, Stephen Appiah – A leader in a historic generation 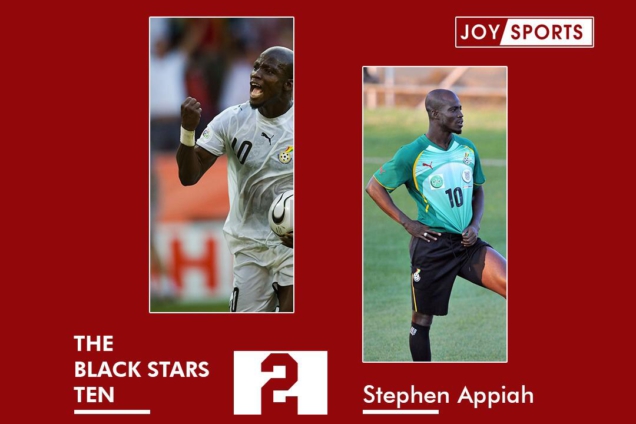 In 2004, Ghana were yet to ever qualify for a World Cup and after losing the first game of the qualifiers to Burkina Faso, their chances of qualification once again looked very slim.

For a qualification process of 10 games which saw only one team qualify out of the group, the Black Stars knew they had a very tiny margin for error in the remaining nine games.

Up next was a decisive game against rivals South Africa, and being the big game player he was Stephen Appiah stepped up and scored a brace.

He scored another crucial goal against Burkina Faso as Ghana secured qualification to its first ever World Cup.

However, it wasn’t just about Appiah’s goals, he was a leader who never stopped believing.

Appiah was appointed as captain of the senior side in 2002 when he was just 21 years. The team was preparing to play a friendly match against Slovenia.

“Tornado” as he is popularly referred to said he rejected the decision to be captain at first, explaining to the coach that Richard Kingson deserved it because he was one of the senior players in the team.

“When I was offered the captaincy, I said no I think Richard Kingson was the more experience in the team at the time so I said he should lead the team.”

“But Kingson tapped me and told me to accept the role and that he and the other senior players would support me,” Appiah told Joy Sports.

Despite being the leader, Appiah’s humility always came first. Once appointed captain, he called Abedi Pele, Osei Kuffuor and Charles Akonnor to “seek their blessings.”

Now history was made, Ghana were at the 2006 World Cup. The four-time African Champions started the tournament ranked 48th in the world and were grouped alongside Czech Republic (second), the USA (fifth) and Italy (12th) in a difficult group E.

“Most people don’t know but we actually agreed among ourselves that we were not just going to add up [the numbers],” Appiah recounted on GTV.

“We went to that World Cup to make history and that made the difference. Our aim was to do something and I think we achieved it because we were united.”

Against all the odds, the Black Stars shone and qualified from group E despite losing their first game to eventual winners Italy.

In the second game against the then highly-rated Czech Republic, it took just two minutes for Ghana to score their first ever World Cup goal.

Asamoah Gyan was the scorer, but Appiah made it all possible with a well weighted lofted pass. Appiah’s form continued as he scored from the spot in the final group game against USA.

Ghana were outclassed in the round of 16 by Brazil but the African nation left the tournament with their heads held high.

Two words that summarised Appiah’s tenure as captain are unity and belief. The midfielder was chosen as captain in a rather turbulent period for the Black Stars. There was no stability in the team as they had failed to impress in the 2000 and 2002 Africa Cup of Nations (AFCON).

The former Juventus player came into the team and was able to steady the ship and made history by leading Ghana’s first ever generation to a World Cup.

2006 will forever remain a historic year for the Black Stars, and the man who led the team was none but Stephen Appiah.

Appiah was duly rewarded after an incredible year winning the Ghana footballer of the year award in 2007.

The longevity of the 39-year-old stretched all the way to 1995 when the midfielder made his debut against Benin replacing Abedi Pele in the 80th minute.

He retired from the national team in 2010 after making 69 appearances for the Black Stars and scoring 16 goals. Appiah left a legacy, one that will be remembered for years to come.

When he was asked about the lack of trophies during his tenure as captain, he replied: “I didn’t win any trophies [with the national team]. People won trophies but their target was always to play in the World Cup. So far as we qualified for the World Cup it was successful. I would have also loved to win an Africa Cup of Nations.”

A leader, a fighter and one that never gives up, the wind from Stephen “Tornado” Appiah is still swirling as his influence on the new generation remains ever-present.