The imam who died fighting racism in South Africa

Relatives and friends of an imam who died 50 years ago while opposing racism in South Africa are still traumatised by his death, writes the BBC's Penny Dale.

The first was a huge funeral march – some 40,000 people carried the coffin of Imam Abdullah Haron for about 10km (six miles) to his final resting place in Mowbray Muslim Cemetery.

And at night a rare and massive earthquake shook the earth.

For many who attended the funeral these two events are indelibly connected – they say the death of the pioneering 45-year-old South African imam was so painful and so shocking.

Imam Haron died in a police cell on 27 September, after 123 days of solitary confinement and daily interrogations about his involvement in the struggle against the racist system of apartheid, which ended in 1994 with the election of Nelson Mandela as South Africa's first black president.

Imam Haron was the first cleric of any faith to die in custody under the apartheid regime. His death signalled that even men of God were not safe from an increasingly repressive, white-supremacist state.

The artist named after the imam

His death caused global outrage, and he became the first Muslim to be commemorated at the famous St Paul's Cathedral in London.

The security police said he died after falling down a flight of stairs.

They said the two broken ribs and 27 bruises on Imam Haron's body had nothing to do with them, despite their notoriety for using torture and beatings.

The imam's family say they do not accept "that lie", and are demanding a fresh inquest to mark 50 years of his death. 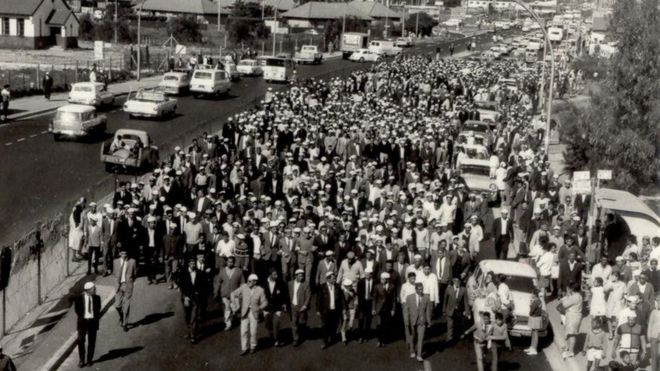 Backing the campaign is visual artist Haroon Gunn-Salie – who is named in honour of the imam and has made several art works memorialising his life and death.

Gunn-Salie's latest work, Crying for Justice, is an installation in the grounds of the Castle of Good Hope in Cape Town – a symbolic burial ground of 118 unmarked graves, one for each of the people who he says died in detention during apartheid, including Imam Haron.

They were all held without trial – and the police said they fell down stairs, slipped in showers, or took it upon themselves to jump out of windows.

'A cry to the courts'

No-one has ever been held responsible for any of those deaths in detention,and it's a sore, open wound for the families.

When finished, viewed from the castle ramparts, the graves Gunn-Salie has dug will spell out the word: Justice?

"It's a public statement asking, quite literally, to unbury the past, to dig up the files, to dig up the evidence, and bring closure to the families."

In a tribute to her, governing African National Congress MP Faiez Jacobs said: "Widowed by what appeared to have been a deliberate killing, she raised her children alone, always wondering how her beloved husband had died.

"If the apartheid rulers thought they could kill her spirit, they were wrong. She stood tall, defiant and principled."

Imam Haron was one of the youngest imams in South Africa – only 32 when he was appointed in 1955 to lead the congregation at the Stegmann Road Mosque in Cape Town.

He was a pioneer in Cape Town's mostly conservative mixed-race Muslim community. 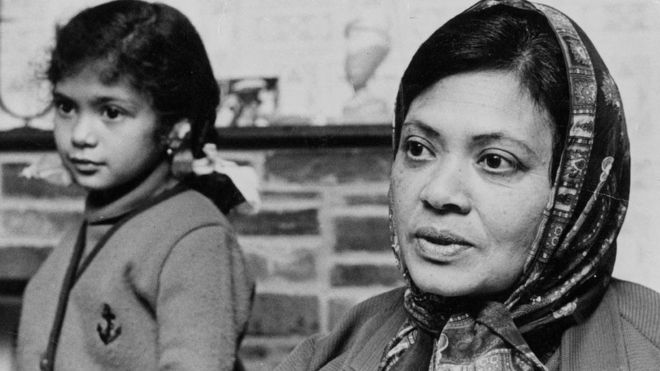 He introduced adult education classes, discussion groups where the topics were chosen by young people and encouraged women to take part. And he invited children to sit at the front of the mosque, rather the back, and to lead prayers.

He also invited people from outside the Muslim community – including trade unionists and liberal politicians – to come and talk to the young people about what was happening in South Africa.

"He didn't fit the pattern of the Muslim clergy which was quite ritualistic," says Aneez Salie, a journalist, former member of the ANC's armed wing and father of the artist Gunn-Salie.

"He was very progressive, away ahead of his time," Mr Salie, who at 13 attended the imam's funeral, told the BBC.

Fatiema Haron-Masoet – the youngest of Imam Haron's three children – was almost six when her father died.

"He had a gentle soul, he was very kind and loving and extremely emotionally accommodating," she told the BBC.

The imam's son Muhammed Haron, now a theology professor in Botswana, was 12 when his father died.

He remembers his father as a deeply spiritual man who had fasted twice a week since he was a teenager – and that wherever he went he wore a black kafiya, the traditional Arabic scarf, or fez.

"That is his identity – a theological man, a man from the Muslim tradition." 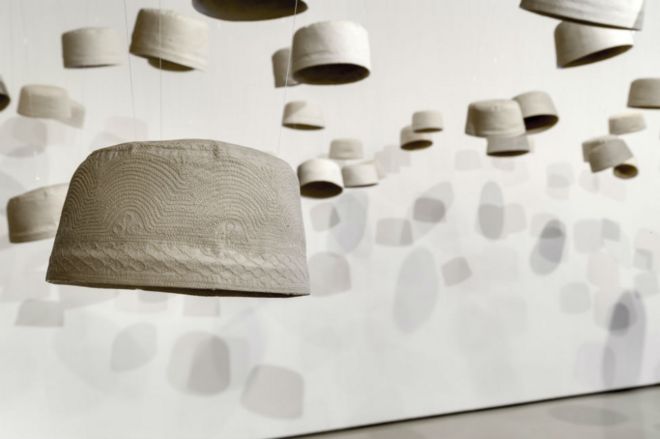 The Muslim prayer hats represent mourners at the imam's funeral, in this artwork by Haroon Gunn-Salie

But he was also a "socialite" and "a man larger than life" – well-dressed, suave, with a sweet tooth, and a passion for rugby, cricket and the cinema.

The imam had his own projector – and Muhammed remembers groups of the imam's friends gathering at the family home where his father would screen films "often beyond midnight on a Friday and Saturday".

The imam was a huge fan of the fictional spy James Bond. Perhaps with a twinkle in his eye, he named his home Golden Eye – after the sprawling Jamaican estate of Ian Fleming, the creator of 007.

Golden Eye, a double-storey house, had a huge balcony – and the railings were designed as musical notes.

"Music was not totally approved of theologically by the conservatives," Muhammed says.

"But my father was theologically able to skirt around some of these issues that may have been considered taboo."

"He had a wider vision of things rather than a narrow notion," Muhammed explains.

Imam Haron's willingness to forge alliances with people of other races, as well as with Christians and communists, made him a particular threat to an increasingly brutal regime desperate to divide and rule.

Former rugby player Yusuf "Jowa" Abrahams – one of the imam's students – remembers how the imam tried to raise consciousness in the Muslim community about the injustices of apartheid, especially for those most hit by apartheid's cruel and racist laws: black South Africans.

"He said to us we need to break down racial barriers and work towards the future," Mr Abrahams told the BBC.

The imam practised what he preached, regularly visiting black communities in townships such as Langa, Gugulethu and Nyanga, where he became fondly known as mfundisi, or priest.

As well as being an imam, Haron also worked as a salesperson for the confectionary company Wilson Rowntree. This job meant he could legally move in and out of the townships – even after the apartheid regime restricted people's movements and segregated South Africa along racial lines with laws like the Group Areas Act. 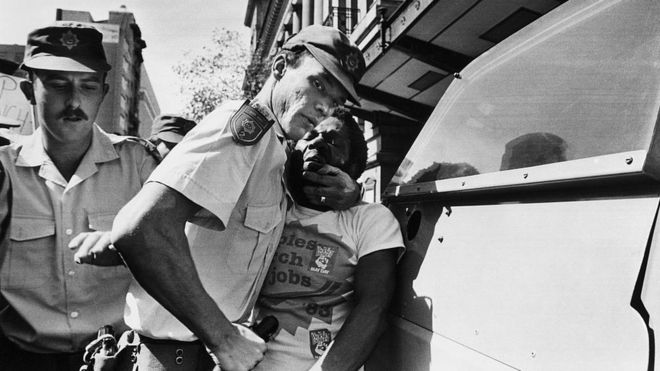 The apartheid regime was intolerant of dissent

In a public meeting held at Cape Town's Drill Hall in May 1961, the imam condemned that law as "inhumane, barbaric and un-Islamic". Four years later, like millions of other South Africans, the imam and his family were forced out of their own home.

Most other imams were too scared to speak out – or they were indifferent, content to be left alone to worship in peace, believing that it was not their duty to stand up to a repressive government.

Hailed as a 'martyr' at St Paul's

He deliberately kept the details of what exactly he was involved in a secret from his wife and his congregation – in order to protect them.

Mr Abrahams believes the imam "died with his secrets".

However, he is known to have developed close ties with the then banned ANC and Pan Africanist Congress (PAC), both of which were waging an armed struggle, and the Black Sash – a non-violent legal and welfare movement of volunteer white women. 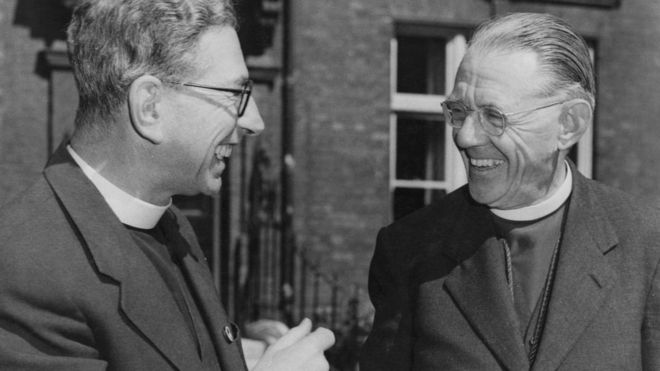 In 1966 and at the end of 1968, the imam went on a pilgrimage to Saudi Arabia. He also secretly travelled to Egypt to meet political exiles and the World Islamic Council.

And he went to London, where his oldest daughter Shamela was studying. There he also met Canon John Collins of St Paul's Cathedral, an Anglican priest who was raising money for the destitute families of political activists who had been killed, detained, or forced into exile.

The imam and the priest struck up a deep friendship and Abdullah Haron agreed to smuggle in and distribute money on his return to South Africa.

But by the time of his return to South Africa in 1969, the imam knew he was in danger. On 28 May 1969 he was picked up by the apartheid police and four months later he was dead.

At the imam's funeral, Victor Wessels, a teacher and Marxist, said: "He died not only for the Muslims. He died for his cause – the cause of the oppressed people."

A few days later, on 6 October 1969, Imam Haron was commemorated in St Paul's Cathedral. His friend, Canon Collins, spoke of him as a martyr, signalling the deep respect the imam commanded across religious and racial lines.