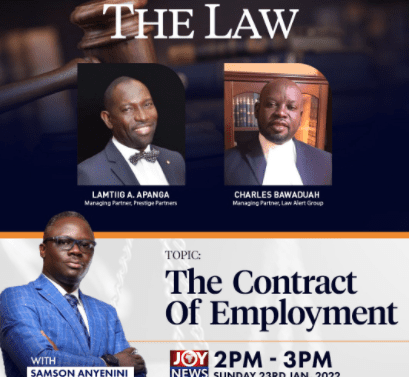 Two legal practitioners, Lamtig Apanga and Charles Bawaduah have expressed their views on a case involving an employee, who has been asked by his boss to resign over approved leave requests.

Speaking on The Law on Sunday, the lawyers opined that the decision of the boss is in violation of the law. According to them, since the boss approved his leave requests, he cannot be asked to resign on the grounds of being an unserious employee.

The employee, who identified himself as ‘Rich’, forwarded the details of his account to host, Samson Lardi Anyenini. Subsequently, his story served as a reference point for a discussion on ‘The Contract of Employment’.

According to Rich, he was engaged by an accounting firm on a two-year contract. The contract came with a 15 day work leave. Based on his leave allocation, Rich intimated that he made three separate requests which were all approved by his boss.

In the first instance, Rich said he asked for a day to attend a funeral. This was followed by a request to attend his sister’s wedding for four days, and a final request to handle a flooding incident at home. In all, he utilised six days out of his leave allocation. However, before the Christmas break, his boss asked him to resign for being an unserious employee due to the number of days’ leave he had applied for within a short span of time.

Reacting to this directive, Rich said he pleaded with his boss to rescind his decision. Unfortunately, his plea was not heard, and his boss insisted he resigned; with an assurance of a one month salary. Rich’s concern therefore is that, does his boss have the right to terminate his contract which has a year more to elapse? And if he does, what compensations are due him?

Addressing his concerns, the managing partner of Law Alert Group, Charles Bawaduah, indicated that owing to the fact that his boss agreed to all his three leave requests, it is unlawful for his boss to ask him to resign. According to him, all employment relationships are based on contracts. Therefore when his boss agreed for him to go on leave on the three respective occasions, a contract was established between himself and his boss; making the dismissal unlawful.

“Employment law or industrial relation practice is all about agreement. It’s fundamentally the law of contract. So that what the parties agree is what must be carried out by both the employer and the employee. So if per the contract, a certain number of days leave have been given, and the employee applies for one day off to undertake one assignment, [then] four days off, and these were agreed by the employer, the employer cannot now use that as a basis for terminating the employment of the employee. That will be in violation of the contract”, Mr. Bawaduah explained.

He also added that, “if the contract did not permit it, [and] nonetheless the employer agreed, that will be an implied amendment to the contract. Because the employer agreed. The fundamental thing is that, there should be agreement. So once there’s agreement, it is not a basis for termination. You can take it out of the number of days leave that the worker is entitled to. And by law, every worker is entitled to at least, fifteen days leave per year”.

He further indicated that since the leave was based on an agreement, if Rich’s boss still goes ahead to insist that he should resign, he will be entitled to a compensation. Mr. Bawaduah however stated that, leave must not be taken in an ‘unorganised manner’, that could disorganise the employer. This is because, the relationship between an employer and an employee should be mutually beneficial, thus, neither part should work to the disadvantage of the other.

According to him, section 27 (1) of the Labour Act also mandates employers to notify their workers thirty days ahead of their leave schedules.

On his part, the managing partner of Prestige Partners, Lamtiig Apanga reiterated the point that every employment is a contractual relationship, which is fundamentally regulated by the Labour Act. He therefore stated that in the case of Rich, his boss’ requests for him to resign is not appropriate. He however indicated that leave must be well planned between an employer and his employee.

“But as my brother has said earlier on, there should be regulation. But the point is, once the employee asked for permission and it was granted, it cannot be used against him. If the employer knew that at that time, he would have required the employee to be at post, he ought to have declined the request and asked him to stay at work because he can’t find a replacement”, Mr. Apanga stated.

He also added that leave schedules must be conveniently agreed between employers and their employees, taking into consideration, prevailing emergency situations and how the work will continue when an employee goes on leave,

Mr. Apanga also disclosed that according to sections 62 and 63 of the Labour Act, there are lawful and unlawful dismissals and based on that, Rich’s boss cannot forcefully compel him to resign. Such a situation in his opinion will lead to a phenomenon referred to as ‘constructive dismissal’.

Explaining the term, the two legal practitioners indicated that constructive dismissal is the situation where an employer deliberately creates an unconducive environment, which eventually compels the worker to lay down his tools. According to Mr. Bawaduah, an employee who finds himself in such a situation, may seek legal redress based on Section 63 (4) of the Labour Act.

Host of the show, Samson Lardi Anyenini said the discussions on the contract of employment with Lamtiig Apanga and Charles Bawaduah, will continue on next week’s edition of The Law on January 30, 2022.