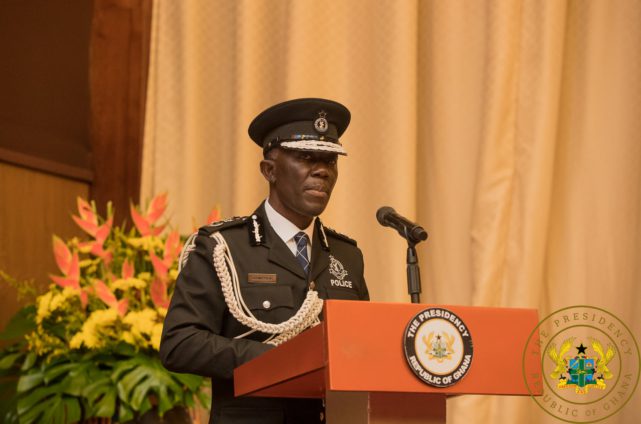 The newly sworn Inspector General of Police (IGP) has called on his fellow security personnel to present a united front to fight against crime in the country.

Dr George Akuffo Dampare, at his swearing-in on Friday, reiterated that a unified Police Service is the “only weapon” to clamp down on criminal activities in the country.

His clarion call comes at a time; the country is recording rampant armed robbery attacks in broad daylight.

The robbers in all incidents have made away with huge sums of money in the heist and, in some instances, killed or wounded their victims.

He further expressed his gratitude to the entire police force for supporting him immensely when he was appointed to his current position.

The IGP was optimistic that the support will continue for the Service, which he described as “family” to pursue all the things it needs to bring peace and tranquillity to the country.

“If I have been able to do anything, it is because of that support that you’ve given me. So colleagues at POMAB and the entire police force, I want to say thank you very much,” he said.

Also, President Akufo-Addo charged the newly sworn-in IGP to establish a Service that has the trust and confidence of the citizenry.

“It is important that the police conduct itself as the principle credible instrument in accomplishing the executive’s duty of maintaining law and order in the state,” he said.

DISCLAIMER: The Views, Comments, Opinions, Contributions and Statements made by Readers and Contributors on this platform do not necessarily represent the views or policy of Multimedia Group Limited.
Tags:
Dr George Akuffo Dampare
Inspector General of Police (IGP)
Unity of the Service