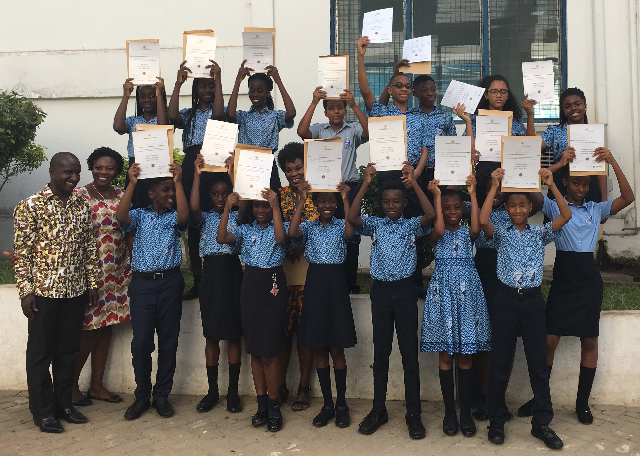 The Roman Ridge School (TRRS), one of the leading international schools in Ghana, has swept 19 medals at the 2016 Queen’s Commonwealth Essay Competition.

At a Special Awards Ceremony held at TRRS on September 9, Principal of the school Valerie Mainoo lauded the winning students and teachers for the remarkable performance in the competition.

Other special messages of congratulations were also delivered by key members of the school's Board of Governors.

Chairman of the Board of Directors, Dr Frank B. Adu Jr., and Chair of the Academic Board of Governors Rev Dr Joyce R Aryee were full of praise for the team members.

According to them, the performance of the medal winners, teachers and families signifies a "triumph for The Roman Ridge School" as well as an “achievement for the youth of Ghana.”

TRRS has a good reputation when it comes to the competition. In 2015 pupils of the school broke the record by winning 23 medals namely seven Bronze, seven Silver, and nine Gold – pitching it as the school with the most medals in Ghana that year.

But the 2016 performance which recorded 19 medals namely five Bronze, six Silver and eight Gold represents the school's best performance – again topping all the schools in Ghana.

The Queen’s Commonwealth Essay Competition began in 1883 and has for 133 years inspired thousands of young writers from the world over. It is administered by the Royal Commonwealth Society in the United Kingdom.

Reputed as the world's oldest and largest competitions, the number of participants increases by the year. In the 2016 competition, over 13,500 young people from almost every Commonwealth member countries and territory successfully competing.

At least 130 judges scrutinised essays submitted around the theme “An Inclusive Commonwealth” – which happens to be year-round Commonwealth theme.

Essays submitted focused on the following topics: significance of community, the importance of diversity and difference, the question of belonging, the values of tolerance, respect and understanding, and the sense of shared responsibility that exists within the Commonwealth today.