The Ukraine crisis is a major challenge for China 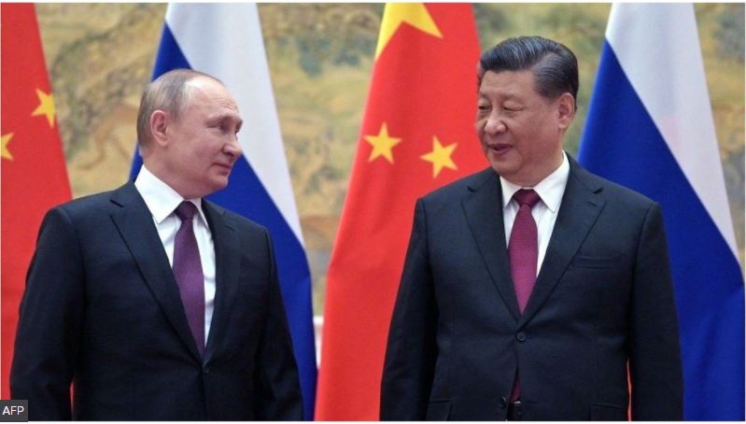 Hours before Russian President Vladimir Putin announced a military operation in eastern Ukraine, the US accused Moscow and Beijing of combining to create a “profoundly illiberal” world order.

Yet State Department spokesman Ned Price also said that this was an opportunity for China to use its leverage with Russia to pull back Vladimir Putin, given the new “no limits” pact he signed with China’s leader Xi Jinping on the same day as the Winter Olympic opening ceremony.

“You will have to ask the PRC whether they have used their own considerable influence with the Russian Federation to that end,” Mr Price said at a press briefing.

The Ukraine-Russia crisis is posing a major challenge for China on many fronts.

The ever-closer diplomatic relationship between Russia and China could be seen at the Winter Games with Mr Putin coming to Beijing as one of only a handful of known world leaders to attend.

Significantly, Mr Putin waited until just after the Games were over to recognise the two breakaway regions of Ukraine and send in troops to back them.

In its public pronouncements, the Chinese government has urged all sides to de-escalate tensions in Ukraine.

But now that Russia has dispensed with all such restraint, where does that leave China’s official position as clashes escalate?

The Chinese government thinks it cannot be seen to support war in Europe but also wants to strengthen military and strategic ties with Moscow.

Ukraine’s number one trading partner is China and Beijing would ideally like to maintain good relations with Kyiv but this could be difficult to sustain when it is clearly so closely aligned with the government which is sending its troops into Ukrainian territory.

There is also the potential for trade blowback on China from Western Europe if it is judged to be backing Russia’s aggression.

In a recent tweet, high-profile diplomat Liu Xiaoming reiterated that China had never “invaded other countries [or] engaged in proxy wars”, adding that it was committed to the path of peace.

But as former US intelligence officer John Culver has posted on Twitter: “Russian annexation of portions of Ukraine, or invasion and seizure of Kiev, violate China’s position that sovereignty is sacrosanct.”

However, Chinese Foreign Ministry spokesman Wang Wenbin has refused to condemn an invasion of Ukraine, or to even refer to what is happening there as an “invasion”.

Mr Wang said China still recognised Ukraine as a legitimate state, but did not comment on whether Beijing would recognise breakaway republics in the east of Ukraine.

For the Communist Party, what will worry it most is where that may leave its own people and their world view.

For this reason, it is manipulating and controlling talk about the Ukraine situation in the press and social media.

It wasn’t going to be long before Taiwan was dragged into the mix.

The self-governing island is seen by the Party as essentially a rogue province that must be unified with the mainland.

On Weibo, China’s version of Twitter, Chinese nationalists have used Russia’s invasion of Ukraine to call on their own nation to follow suit with comments like: “It’s the best chance to take Taiwan back now!”

When the Chinese government rejected the imposition of sanctions on Russia in recent days it knew it could face similar treatment if it moves to seize Taiwan by force, in what would be a bloody, costly exercise.

Foreign Ministry spokeswoman Hua Chunying told a regular press briefing in Beijing that China has never thought that sanctions were the best way to solve problems.

But if Chinese citizens start joining the dots with Russia’s justification for invading Ukraine and applying it to their own country, this could upend the Chinese government’s entire explanation for its current borders.

Vladimir Putin says he’s liberating Russian speakers inside Ukraine. What of the ethnic Mongolians, Koreans, Kyrgyz and the like who are now part of China? More potentially explosive for Beijing, what if Tibetans or Uyghurs renew calls for greater autonomy or even independence?

That this does not happen is more important to Xi Jinping’s administration than anything.

Given that, you only have to look at the remarks on Chinese social media to see the direction the Party’s media is driving the population in terms of the way it should view Mr Putin’s moves in Eastern Europe.

The state press has its own accounts on Weibo and controls the responses to its posts about Russia and Ukraine.

Here is a flavour of the comments:

“I support Russia, oppose US. That’s all I wanna say.”

“America always wants to create mess in the world!”

While there are also a lot of people calling for peace, posts attacking the US are being heavily promoted.

In terms of Chinese people actually questioning Russia’s ambitions in Ukraine, you have to seek out individual Weibo accounts not connected to the Party media threads.

One writes: “I don’t understand why so many people support Russia and Putin. Is invasion to be seen as justice? We should oppose any form of war!”

According to another: “Putin recognises the independence of Ukraine separatist regions, which is obviously interfering in the domestic affairs of another country.”

And there you have it. That last post is expressing precisely the conclusion which Beijing does not want its people coming to.

It is the essence of the minefield the Chinese government is walking through.

Inside Ukraine, China’s embassy has sent out a message to Chinese citizens living in the country now locked in a major war.

It has recommended that people post a Chinese flag on their car and “help one another out” while showing “China’s strength”.

Asked if what is occurring right now in Ukraine amounts to an invasion, Foreign Ministry spokeswoman Hua Chunying told a press conference that the “historical context is complicated” and that the current situation is “caused by all kinds of factors”.

There is a major upheaval unfolding in Europe. Xi Jinping has some big choices to make in terms of how his country will deal with it.

DISCLAIMER: The Views, Comments, Opinions, Contributions and Statements made by Readers and Contributors on this platform do not necessarily represent the views or policy of Multimedia Group Limited.
Tags:
China
Russia
Ukraine crisis