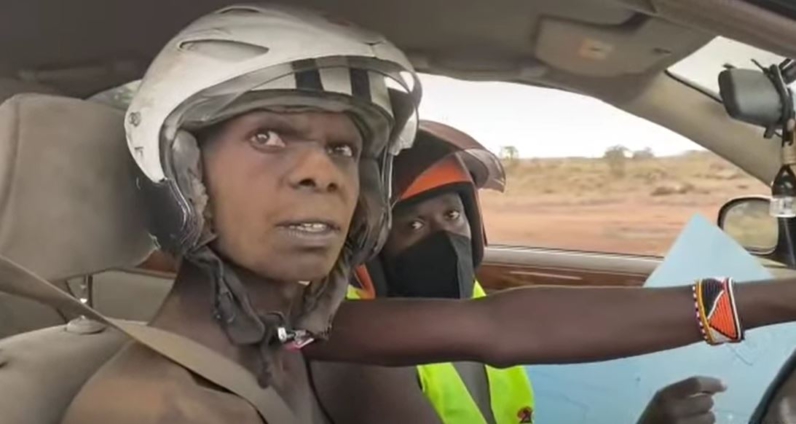 The past few days have seen a new trend on social media.

It comprises two dusty-looking men in a car speaking to an interviewer about a just-ended race in what appears to be a desert.

The duo, wearing helmets which did not look fit for the occasion, explained how their race was impeded by wrong turns even though the navigator had a map guiding the trail.

Speaking in their native dialect, the driver seemed confident that they finished 16th or 15th while his navigator contradicted him by saying they placed 21st instead.

They justified their predicament by showing leaves from their vehicle as a result of them being stuck earlier on a maize farm.

Photos from this video have gone viral in a unique fashion and has social media users going crazy.

Me talking to my volunteers and they keep arguing with me on how they want to do their own and derail the entire strategy. pic.twitter.com/e2WJhiIgfY

It has become a comic trend to portray unexpected plot twists using their hilarious facial expressions.

The images have been used in thousands of posts on Twitter and TikTok, triggering curiosity about where the two emanated from.

It has gone viral in Ghana, Nigeria, Zambia, Uganda, Kenya among other counties.

Myjoyonline.com has conducted checks and has come out with some more details about the meme.

It has emerged that it was a skit performed by two comedians from Kenya about the World Rally Championship.

The video was to recreate the scenes of drivers who participated in the June 2022 Safari Rally that took place in Naivasha.

The comedians, Arap Marindich and Tula Chemoget from Kenya took to making skits for some years now.

“I’m in Accra” where? “Kasoa” pic.twitter.com/kC7zhbG5wZ

There is also a subsequent video of one of them being cleaned using a water hose at a car wash after the supposed race.

Meanwhile corporate brands have also jumped into the fray using the images to expand their reach through witty captions.

Below are memes emanating from the trend;

I love you. As a brother pic.twitter.com/KxVCb5spv8

Tomorrow is a holiday But you still have to come to work pic.twitter.com/3qmhH7KdRX