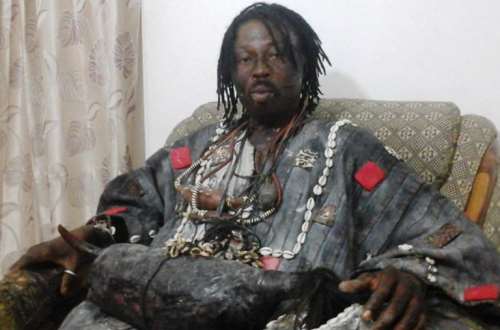 Spiritualist Kwaku Bonsam has cautioned Ghanaians to be cautious of people advertising money-doubling schemes by so-called ritualists on television and social media.

He explained that there is no such thing as money-doubling in the world adding these self-acclaimed spiritualists who are promising such to victims are fraudsters.

Speaking on Ghana Connect, he told Evans Mensah that many of these men have no money to their name neither do they have jobs and are solely focused on using mind games to trick others.

The traditional priest said that if these men could truly “double money” they would have been rich and could possibly double some money to help government embark on its various developmental projects.

Unlike these spiritualists, Kwaku Bonsam said that he owned lands and businesses before he assumed the role of a priest.

He stated that thanks to these works he is able to afford the luxury he enjoys.

“You can see me use SUV car, (it is because), before I became a traditional priest I was a gas seller. I have my own gas filling station. I also do something else. (There’s a time) I went to Sapema, in Accra, The plot there was ¢19 million old cedis, and then I bought more than 252 plots, that time.”

“I sold my cocoa farm at Afrancho and Sehwi and bought that land. Now the plot is worth GH¢600 million. So if I sell 20 (plots), I get some money. Those people they don’t business, they are using their own mind to trick people, they are fraudsters, they need to put them in jail.”

His comment comes after some Ghanaians expressed concern over the proliferation of quick money schemes on TV following the murder of a 10-year-old boy in Kasoa by two teenagers.

According to the Police, one of the suspects confessed that a spiritualist, whom they had discovered on national television agreed to help them become instant billionaires if they will provide a human being and a sum of ¢5,000.

Days after the news broke, a spiritualist suspected to be involved in the murder was arrested.

The Ghana Police Service has arrested two more suspects in connection with the gruesome killing.

This development has triggered anger among a cross-section of Ghanaians over the seeming increase in spiritualists and mallams on television promising unreasonable get-rich-quick avenues for the unsuspecting youth.

Kweku Bonsam stated that these spiritualists who lure young people into committing heinous crimes should be arrested and dealt with by the law.

He added that traditional priest will welcome new laws from parliament that does not only check their activities but ensure they do not cross a line.