Thousands of widows showered with gifts in the Ashanti Region 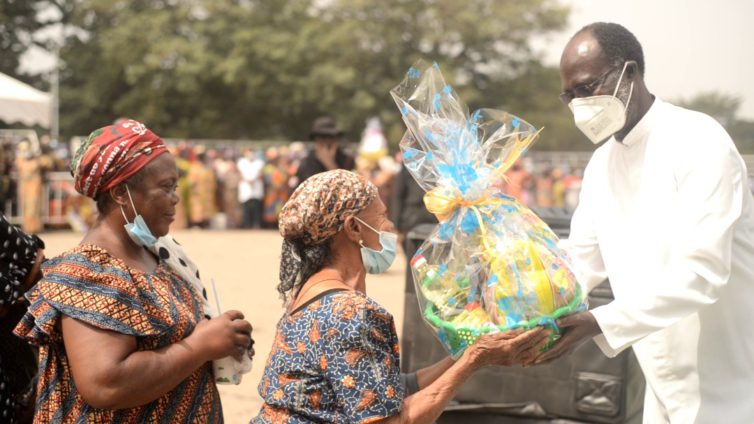 Thousands of widows from across the Ashanti region have received donations to support them in celebrating Christmas.

The donation which was in collaboration with Nhyira and LuvFM and worth over 1,000,000 cedis was aimed at supporting the poor and needy widows during the festive season.

The Christmas donation exercise commenced in 2019 with 350 people receiving donations in both cash and kind.

Abena Kwaadu, a widow and a mother of 4 is among the many that benefited from this year’s edition.

“When my husband died, nobody cared to catered for our children. I’ve been working at a farm to provide for my children.

“The little I get from the farm is what I use in fending for my children. I have nobody to cater for myself and my children,” she said.

The items including bags of rice, oil, GTP cloth, and other cooking items were provided by Businessman and philanthropist, Emmanuel Aboagye.

“Because of the pandemic, there has been a lot of shocks around the whole world. Ghana is no exception. So we decided to help out so the widows can be part of the festive season,” he said.

He explained his past experience as a son of a widow motivated him to give back to the vulnerable.

“I’ve been in their shoes before because my mum was once a widow. You have to be part of them to know the pain they’re experiencing.

“We decided to do it for the widows because most of the time, our mothers are the ones who usually take care of the family. Some fathers don’t really care about what the family goes through,” he added.

Mr. Aboagye explained that the gesture would be replicated in the Northern part of the country.

“We are trying to move to the North. So next year, we will be having two forms: one in the southern sector, that’s the Ashanti region, and another for our families in the Northern sector of Ghana,” he revealed.

DISCLAIMER: The Views, Comments, Opinions, Contributions and Statements made by Readers and Contributors on this platform do not necessarily represent the views or policy of Multimedia Group Limited.
Tags:
Christmas
Emmanuel Akwasi Aboagye
Needy and Vulnerable
Widows