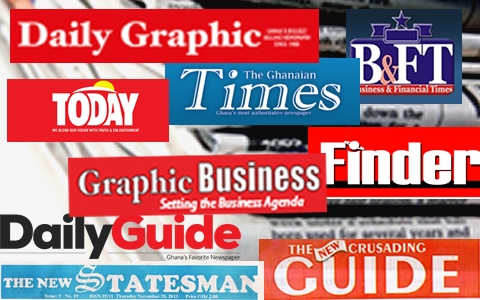 The Supreme Court has granted the application filed by Martin Amidu to orally examine NDC bankroller, Alfred Woyome, over whether or not he (Woyome) has the means to pay the controversial GHÈ»51.2 million judgment debt paid to him by the state.

The NPP yesterday alleged a dubious deal between the government of Ghana and waste management company, Zoomlion Ghana Limited.

A 30-year-old man who claimed to be National Security operative and dressed in full military apparel has been arrested.

The Chief Justice, Georgina Wood, yesterday launched the 3rd edition of the manual on election adjudication in Ghana amidst power outage.

Banks operating in Ghana made a provision of GHÈ»631.8 million as bad debts in their books at the end of July 2016, the latest Financial Stability Report indicates.

With 19 days to crucial presidential and parliamentary elections in Ghana, President John Mahama has acknowledged  that current economic conditions in the country have impacted negatively on businesses and that his government is taking measures to improve the business climate.

As the Monetary Policy Committee of the Bank of Ghana takes a decision on the benchmark interest rate on Monday November 25, 2016, analysts are expecting a further squeeze in liquidity, at least for the next two to three months.

Whereas banks are struggling, telecom companies are thriving and that is the story that best tells the uneasiness of bankers at the growth of mobile money services in Ghana.

The General Manager of Multichoice Ghana, Cecil Sunkwa-Mills has singled out piracy as the company’s greatest operational challenge that is denying it of huge revenue inflows, taxes to the nation and royalties and also copyright fees to content creators.

AMIDU, WOYOME TO SLUG IT OUT

WE HAVE DOLLARS; BANKS MOVE TO DAMPEN SPECULATIONS

Commercial banks have given an assurance that they have adequate foreign currency supplies from the Bank of Ghana to meet demands for United States dollars.

The flag bearer of the People’s National Convention, Dr Edward Mahama, yesterday launched the party’s manifesto for Election 2016 in Bolgatanga in the Upper East Region, with a pledge to fight corruption in the system if elected President on December 7, 2016.