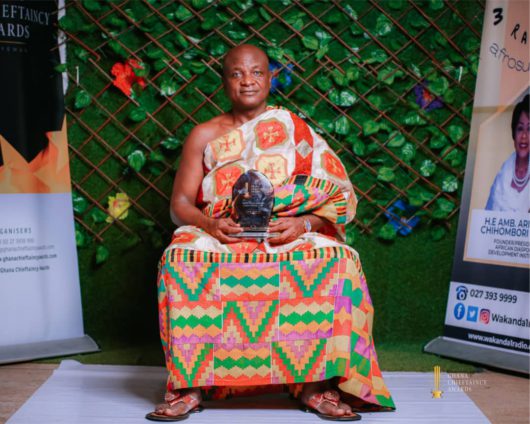 A rich royal and traditional ambiance characterised the maiden Ghana Chieftaincy Awards at the National Cultural Centre in Cape Coast on Saturday.

The prestigious and well attended event attracted close to 40 traditional rulers including paramount chiefs and Queenmothers from across the country.

After the awards board’s thorough scrutiny of his track record and positive impact on his community and Ghana as a whole, Togbe Afede XIV, President of Asogli Traditional Area emerged as the overall winner.

The Agbogbomefia of the Asogli State and former President of House of Chiefs received the flagship prize “The Most Outstanding Chief of the year 2021” for his contribution to his paramountcy to the admiration of all the dignitaries gathered.

Five Queenmothers were awarded in the sub categories in the Paramount Queenmother of the year category.

Five Divisional Chiefs of various jurisdictions who have distinguished themselves in their respective fields of endeavours were duly honoured.

They included the Divisional Chief of the Anomabo Traditional Area, Nana Obrempong Kese Obuadge VIII who won the Culture Award.

Founder of the Ghana Chieftaincy Awards, Nana Obokese Ampah I said: “Frankly, my expectations for the night has been met, I hope this ceremony would encourage other Traditional Rulers to work harder to improve lives of their people.”

He added the foundation would put efforts in place to improve upon subsequent events.

The event was organised by the Obokese Foundation to reward Traditional Rulers who were making strides and impacts in their respective jurisdictions and the country at large.

DISCLAIMER: The Views, Comments, Opinions, Contributions and Statements made by Readers and Contributors on this platform do not necessarily represent the views or policy of Multimedia Group Limited.
Tags:
Ghana Chieftaincy Awards
Togbe Afede XIV