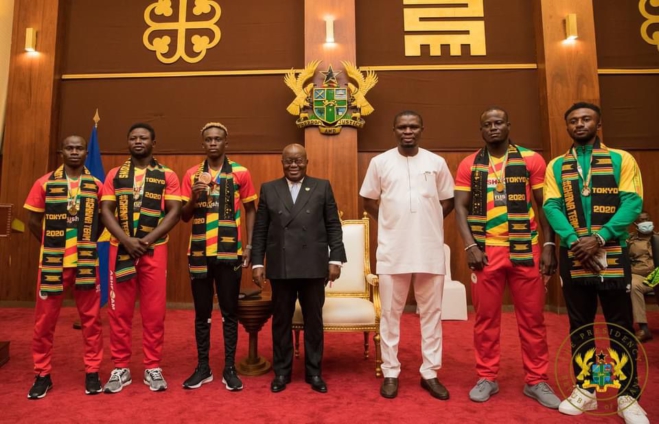 The Minister for Youth and Sports, Mustapha Ussif has commended Ghana’s Tokyo 2020 Olympic Team as the best in the 4th Republic.

The team, recorded impressive feats, including breaking national records in the men’s 4×100 metres relay, weightlifting and swimming, as well as ended the nation’s Olympic medal drought in nearly three decades.

Ussif, who led the Olympic team to the Jubilee House to meet with President Nana Addo Dankwa Akufo-Addo had words of praises for the continent.

He recounted the success story of the team in the various disciplines, and concluded by referring to their feat as “the most successful Olympic team in the 4th Republic.”

The team which won a bronze medal in the Men’s Featherweight Division also chalked several successes, including Abeiku Jackson of the Swimming discipline setting a National and CANA Zone 2 record (West and Central Africa) of a 53.39s in the 100m Butterfly event, Benjamin Azamati, Joseph Amoah, Emmanuel Yeboah, and Sean Sarfo-Antwi also making it to the final of the 4x100m relays for the first time since Atlanta 1996, with an impressive 38.08s National record.

The Minister also highlighted support the Ministry of Sports provided the team, including supporting their preparations and also paying per diems and qualification bonuses promptly.

The President, Nana Addo Dankwa Akufo Addo in his speech congratulated the team for their individual and collective achievements and pledged his unflinching support towards the Commonwealth Games in Birmingham next year and the African Games which will be hosted in Ghana 2023.

He also announced a $5,000 reward for each member of the team, a $10,000 reward for the 20yrs bronze medalist, Samuel Takyi and a $20,000 investment fund towards the development of his career.

The President in thanking the team for making the country proud, also admonished them to put in their best to win more medals in the coming tournaments.

Ghana Olympic team is currently ranked 79th out of the 206 countries competing in the Olympic games. Ghana last won a bronze medal at the Barcelona 1992 Olympics with the U23 Men’s football team.

Takyi joins the likes of Clement Quartey, a light welterweight who won silver at Rome 1960, Eddie Blay a bronze light-welterweight medallist at Tokyo 1964 and Prince Amartey a bronze middle-weight medalist in Munch 1972 to make history for the country at the boxing discipline of Olympics Games.

DISCLAIMER: The Views, Comments, Opinions, Contributions and Statements made by Readers and Contributors on this platform do not necessarily represent the views or policy of Multimedia Group Limited.
Tags:
Ghana 4×100 relay
Mustapha Ussif
Tokyo 2020