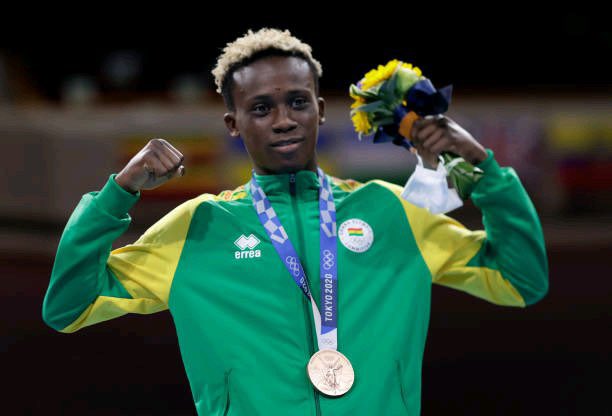 Samuel Takyi won a boxing bronze medal at the Tokyo 2020 Olympics, Ghana’s first podium finish in 29 years. However, his incredible Olympic journey ended after he lost his semi-final bout against Ragan Duke in the men’s featherweight in the ongoing Olympic Games in Tokyo.

“The Golden Ring Warrior” has gone from unfancied selection on the Ghana team to featherweight podium glory, with more than 30 million people in his corner.

Up against a more experienced boxer in 23-year-old Ragan, Takyi once again left it all in the ring and pushed his opponent all the way, eventually losing out on a 4-1 split decision.

Takyi started strong, scoring on sharp jabs and using his height advantage, taking the first round 3-2.

But Round 2 went to Ragan, who was technically superior, then really turned it on early in the third, scoring with a bruising left-right combination and keeping Takyi from landing those rangy punches, working it inside.

The journey of the Ghanaian starlet at #Tokyo2020 is over after losing this semifinal. Duke, who has already gone pro, too good for ‘the Ring Warrior’.#JoySports • #Boxing pic.twitter.com/43sPB4Bhzz

The judges scored rounds two and three 4-1, meaning Duke will box for gold, while Takyi returns Ghana a hero, bringing a bronze with him that represents Ghana’s first boxing medal since 1972 and their first in any sport since the football team won bronze at Barcelona ’92.

The 20-year-old Takyi defied all the odds at his debut Olympics, proving that there’s much more to come from this talented fighter.

He joins the pantheon of Ghanaian Olympic boxing greats Clement Quartey, a light welterweight who won silver in Rome in 1960; Eddie Blay, a bronze light-welterweight medallist from Tokyo 1964 and Prince Amartey who made history in Munch 1972.

Takyi’s road to the podium

In the preliminary round of 32, the young boxer received a bye and was then drawn against Ecuador’s Jean Carlos Caicedo in his round of 16 bouts.

Too good for Caicedo; a unanimous decision took Takyi to the quarter-finals.

Ceiber Avila was eliminated at Rio 2016 before the medal rounds and was all out to make it count in Tokyo, a tenacious puncher that tested Takyi to the limit.

Drop your congratulations for the young star here! pic.twitter.com/eP2MCyYVVw

The Ghanaian bounced back from a first-round rout to win the final two, guaranteeing him a bronze medal and sparking off celebrations at home.

Duke Ragan was a step too far for Ghana’s rising star as he boxed for a shot at gold, but now he has a platform to build on; at 20 years of age, he’s tall and slender, expect him to fill out and fight in heavier weight divisions in the future, with plenty of raw talent to develop.

Samuel Takyi: From the football pitch to the Olympic boxing podium

Takyi didn’t even like boxing when he was younger; football was his thing, but when he slipped on the gloves for the first time, it was game over for football, and boxing was all that mattered.

Honing his skills at the Discipline Boxing Academy in Accra, Takyi quickly proved he has what it takes at the international level.

🥉 Ghana’s newest bronze medallist at the #Olympics started out as a footballer.

He defeated the top-seeded featherweight Mohamed Hamout of Morocco at the 2020 African Olympic boxing qualifiers in Dakar, Senegal.

He punched that ticket to Tokyo when he bounced back from defeat in the semi-finals to Everisto Mulenga by beating Isaac Masembe of Uganda to finish in third place in the qualification tournament.

And now, after proving that he has something special at his maiden Games, the future’s bright for Ghana’s rising star.