Toxic leak from Angola diamond mine kills 12 in DR Congo 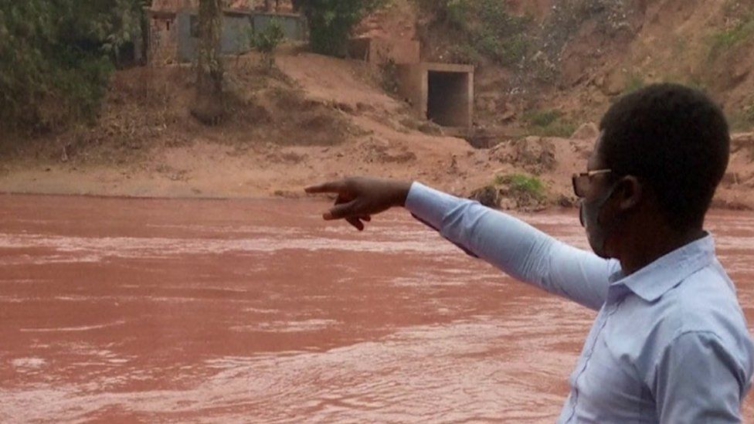 The Tshikapa river in DR Congo turned red because of the pollution, officials say

A toxic leak from a massive diamond mine in Angola killed at least 12 people and left 4,500 sick, a minister in neighbouring Democratic Republic of Congo says.

The leak turned a tributary of the River Congo red and killed huge numbers of fish, which some people ate, said Environment Minister Eve Bazaiba.

She said that DR Congo would seek damages but did not specify how much.

There has been no public response so far from the Catoca mine’s owners.

According to Reuters news agency, the mine produces about 75% of Angola’s diamonds.

After a reservoir containing toxic by-products from the mine leaked in late July, the Tshikapa river across the border in DR Congo turned red killing hippos, fish, and other animals.

Ms Bazaiba said there were “tonnes of dead fish floating on the river… and then the first reflex was to take the fish”.

Officials in Kasai province banned people from drinking water and eating fish from the river but about a million people were affected.

Communities living on the river banks suffered from diarrhoea and other health problems.

Ms Bazaiba said it was good that both the Angolan government and the mine’s owners recognised what had happened.

But she did not give any further details of DR Congo’s request for damages which she said was in accordance with the “polluter pays” principle.

Catoca, which is jointly owned by Angolan state diamond company Endiama and Russia’s Alrosa, said it had built two dykes to filter sediment out of the water and that the leak had been sealed, Reuters reports.

DISCLAIMER: The Views, Comments, Opinions, Contributions and Statements made by Readers and Contributors on this platform do not necessarily represent the views or policy of Multimedia Group Limited.
Tags:
Angola
Diamond mine
DR Congo
Toxic leak