Businessman installed as chief of Abrense in Ashanti Region 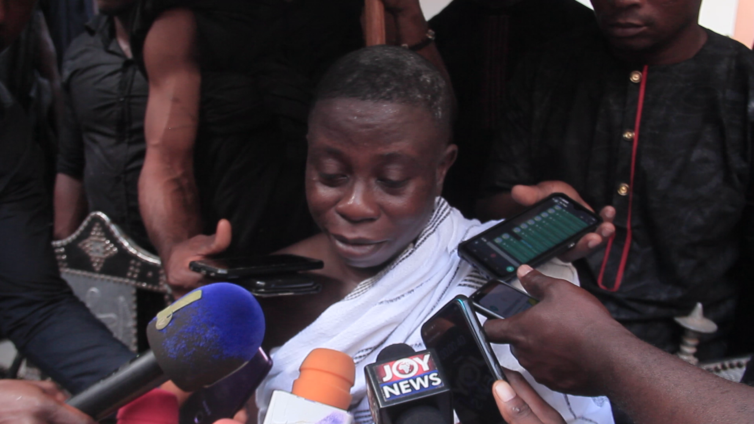 A 34-year-old businessman has been coronated as the chief of Abrense in the Amansie West District of the Ashanti Region under a stool title, Nana Darko Gyau III.

Mr. Mensah Emmanuel, who also serves as Kontihene for the Manso Nkwanta Traditional Area, succeeded his grandfather, who died about two years ago.

The young man was installed in front of a large crowd of people from far and near who gathered at the Manso Nkwanta Chief’s Palace to witness the traditional occasion.

Following his coronation, the new Chief thanked his predecessors, as well as the chiefs and people of the traditional area, for entrusting him with such a venerable role.

Nana Darko Gyau III promised to always be available to the people, especially the traditional council, in times of need.

Nana Gyau III, who has undertaken a number of development projects such as schools, roads, and water, among others, has also pledged to renew his commitment to improving community life.

“Even before I was sworn in as chief, I had built a 10-unit classroom block in my community, a chief’s palace, drilled four boreholes, and, while building a CHPS compound, reshaped the Antoakrom-Buieso road to make it motorable. So I’ve done a lot for my community. Now that I’ve been given this position, I’ll be working on a lot more projects,” he said.

The royal urged the community to embrace peace and collaborate with him to make Abrense a desirable destination for many foreign residents.

He also stated his willingness to collaborate and communicate with the council in order to bring development to the entire traditional area.

Following the ceremony, the Manso Nkwanta Omanhene, Nana Bi -Kusi Appiah, urged the new chief to remain loyal to the clan and accountable to the paramountcy.

He also urged him to remember to seek their help in times of difficulty in order to make his reign a success.

DISCLAIMER: The Views, Comments, Opinions, Contributions and Statements made by Readers and Contributors on this platform do not necessarily represent the views or policy of Multimedia Group Limited.
Tags:
Ashanti Region
Mensah Emmanuel
Nana Darko Gyau III
Trader