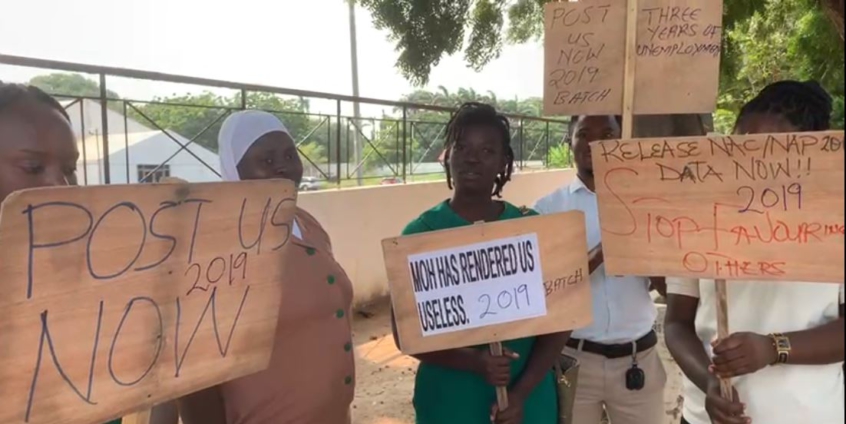 Some aggrieved trained nurses have picketed at the Parliament House ahead of the presentation of the 2022 Mid-year budget review by Finance Minister, Ken Ofori-Atta.

The unemployed youth say they have now become a burden to their families and are fed up, after three years of sitting at home without any job.

According to them, picketing at the premises of Parliament will be their last resort to get government to hear their plea after nearly three years of prolonged silence by their employers.

“Right now, we are burdens to our families. Some of them are thinking that we failed our exams, which is not so,” they told JoyNews reporter, Michael Papanii Asharley on Monday.

As of the time of filing this report, the frustrated nurses were seen at the precincts of Parliament holding placards with various inscriptions.

The Finance Minister, Ken Ofori-Atta, will soon present the 2022 Mid-Year Budget Review to Parliament for approval.

He is expected to make his first official comments on the decision to seek an IMF bailout after publicly stating that the country would not go to the Bretton Woods institutions for help.

Mr Ofori-Atta will equally provide information on revenue and expenditure in the first half of the year and the country’s current budget deficit figures.

The Finance Minister was scheduled to deliver the address on Wednesday, July 13, but the date was changed due to the negotiations between government and the International Monetary Fund (IMF).

Amid the various expectations shared by stakeholders, the nurses want the Minister and the government to consider employing them immediately.

DISCLAIMER: The Views, Comments, Opinions, Contributions and Statements made by Readers and Contributors on this platform do not necessarily represent the views or policy of Multimedia Group Limited.
Tags:
Employment
Mid-year budget review
nurses
Nurses posting
Parliament
Trained nurses