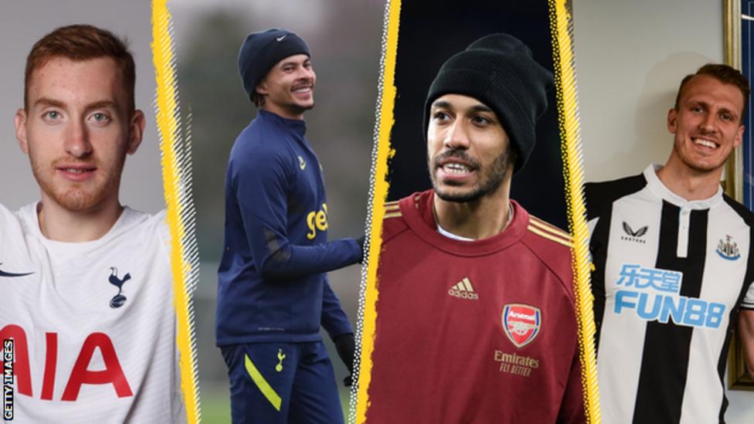 Dejan Kulusevski, Dele Alli, Pierre-Emerick Aubameyang and Dan Burn were all on the move

Premier League clubs completed the second-highest spending January in history – with a total of £295m spent – as Tottenham made the biggest moves on deadline day.

A total of 12 Premier League transfers on deadline day took spending to the highest total since 2018’s £430m as clubs appear to have recovered from the effects Covid had on finances.

Twelve months on – and with capacity crowds now back in stadiums this season – Spurs signed two Juventus players for at least £24m, sold England midfielder Dele Alli to Frank Lampard’s Everton for a fee of up to £40m and loaned out three players.

Over half of the money spent by Premier League clubs (£150m) came from the bottom five clubs – Everton, Norwich, Newcastle, Watford and Burnley. Last year the bottom five spent a total of £5m.

Dan Jones, partner and head of the Sports Business Group at Deloitte, said: “This transfer window indicates that the financial pressures of Covid on Premier League clubs are easing, with spending firmly back to pre-pandemic levels and remarkably among the highest we’ve ever seen in January.

Premier League clubs’ net spending (the cost of purchases minus sales) of £180m is the highest since the January transfer window was introduced in 2003.

What happened on deadline day?

Uruguay midfielder Rodrigo Bentancur joins Spurs for £15.9m (which could rise by £5m) and Antonio Conte’s side have paid an £8.3m loan fee for Sweden winger Dejan Kulusevski with an option to buy for £29.2m.

Manchester City signed River Plate striker Julian Alvarez for £14.1m – although he will go back on loan to the Argentine club until the summer.

Crystal Palace signed two strikers – Jean-Philippe Mateta, who had been on loan from Mainz, for £9m and £1m Luke Plange, who goes back on loan to old club Derby.

Brighton signed Royale Union Saint-Gilloise forward Deniz Undav for a reported £6m but loaned him back to the Belgian club.

Brentford made the first signing of the day when they recruited Denmark midfielder Christian Eriksen on a free transfer.

Other Premier League players to move to the second tier on loan were Tino Anjorin (Chelsea to Huddersfield), Jed Steer (Aston Villa to Luton) and Charlie Goode (Brentford to Sheffield United).

What happened in the rest of January?

Liverpool made the biggest signing of the window in England the day before deadline day, with Porto’s Colombia winger Luis Diaz joining in a deal worth 45m euros (£37.5m), with a further 15m euros (£12.5m) in potential bonuses.

There were four other Premier League signings worth £10m or more.

The biggest signing in Europe came when Juventus signed Fiorentina forward Dusan Vlahovic – who had been a target for several Premier League sides – for an initial £58m.