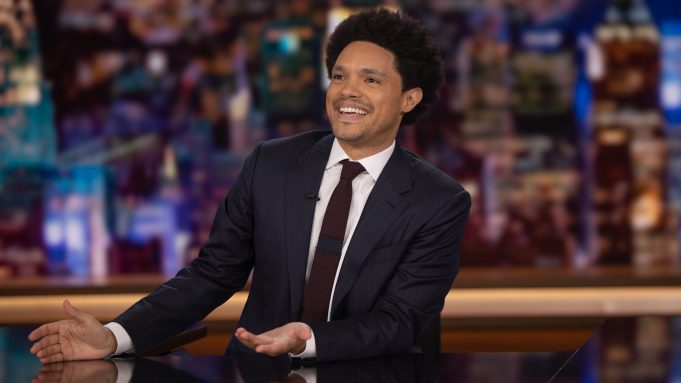 “Don’t be sad,” Noah said in his closing monologue, adding, “It doesn’t feel like seven years. Well, not at the desk. Obviously I went home in between. But still, it’s been a wild ride.”

A lineup of correspondents’ segments paying tribute to Noah and a video montage of goodbyes from Oprah, Issa Rae, Kamala Harris, Tracy Ross, Bill Gates, Hillary Clinton and more helped usher the host through the night.

“I would never pretend to understand America, you know, in the relatively short time I think I’ve been here,” said Noah, whose perspective as a South African comedian brought an outsider’s perspective to the show. But he did offer a few lessons he has learned.

Noah noted the strong influence American political parties hold, encouraging his audience to consider issues outside the lens of democrat or republican ideals.

“As we live in a society where we increasingly introduce ourselves to things that separate us, we forget that real friendships come from the similarities, and then the disagreements are how we polish each other as human beings,” he said.

In the last minutes of the show, Noah thanked Black women, particularly those who took the time “to inform me, to educate me, to argue with me.”

“I’ve often been credited with, you know, having these grand ideas … Who do you think teaches me? Who do you think has shaped me, nourished me, informed me. From my mom, my gran, my aunt – all these Black women in my life,” the host said.

“If you truly want to learn about America, talk to Black women,” he continued.

Noah took over the program in 2015 from long-time host Jon Stewart whose 16-year run of the show shaped it into a late-night staple.

The comedian had appeared as a correspondent on “The Daily Show” for only a few months before he was tapped to fill the anchor chair. Though little-known to American television audiences at the time, Noah had already garnered a significant following outside the US.

He quickly molded the program around him, puckishly guiding his audience through singular national experiences such as the Trump presidency and the Covid-19 pandemic.

When Noah announced his exit from the show in late September, he hinted that his decision was inspired by a desire to perform out from behind the desk.

“I spent two years in my apartment, not on the road, and when I got back out there, I realized there’s another part of my life out there that I want to carry on exploring. I miss learning other languages. I miss going to other countries and putting on shows,” Noah said.

The comedian is only taking a brief hiatus before hitting the stage again. He kicks off his “Trevor Noah: Off The Record” tour in Atlanta on January 20.

When the show returns on Tuesday, January 17, the network has announced a lineup of comedic greats who will fill in as host, including Chelsea Handler, D. L. Hughley, Leslie Jones, Hasan Minhaj, Kal Penn and Wanda Sykes.

But the long-term future of the show remains unclear as the network has yet to say whether guest hosts will revolve indefinitely or if a permanent host will be installed in the chair.

DISCLAIMER: The Views, Comments, Opinions, Contributions and Statements made by Readers and Contributors on this platform do not necessarily represent the views or policy of Multimedia Group Limited.
Tags:
The Daily Show
The Daily Show with Trevor Noah
Trevor Noah