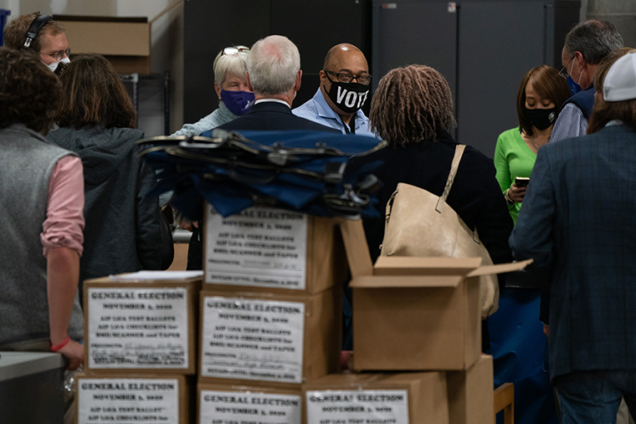 A Fulton County Board of Elections official, center, speaks to lawyers and representatives for the Democratic and Republican parties at the Fulton County Registration and Election warehouse in Atlanta, Georgia, U.S., on Wednesday, Nov. 4, 2020. Georgia Secretary of State Raffensperger said Wednesday the state has only about 250,000 ballots left to count, and he expects to have every vote counted by the end of the day. Photographer: Elijah Nouvelage/Bloomberg via Getty Images

The Trump campaign team is filing a lawsuit to stop vote counting in Georgia, a campaign official said.

It is unclear whether the suit will be successful.

“President Trump and his team are fighting for the good of the nation to uphold the rule of law, and Georgia’s law is very clear: to legally count, mail ballots must be received by 7:00 p.m. on Election Day.

“That’s still the law, even after Democrats sued earlier this year to extend the deadline and delay Election Day—President Trump and Republicans fought to uphold Georgia law, and we won,” Trump Deputy Campaign Manager Justin Clark said in a statement.

“We will not allow Democrat election officials to steal this election from President Trump with late, illegal ballots. President Trump and the Georgia Republican Party have filed suit to require all Georgia counties to separate any and all late-arriving ballots from all legally cast ballots to ensure a free, fair election in which only legal, valid ballots count.”

Separately, David Shafer, the chairman of the Georgia state GOP, tweeted a short time ago, “I have authorized lawyers for the Georgia Republican Party to file an emergency petition against the Chatham County Board of Elections to enforce election laws and prevent the unlawful counting of absentee ballots received after the election.”

Trump advisers are nervously watching the final returns in Georgia, and have been taken aback by Biden’s performance in what was thought to be a GOP stronghold.

Both Trump advisers said African American turnout in Georgia for Biden is exceeding their expectations, resulting in a very tight race.

Still, both advisers believe Trump has a better chance of closing the gap in Arizona than Biden has in Georgia.

DISCLAIMER: The Views, Comments, Opinions, Contributions and Statements made by Readers and Contributors on this platform do not necessarily represent the views or policy of Multimedia Group Limited.
Tags:
Campaign
Georgia
Trump
US election 2020