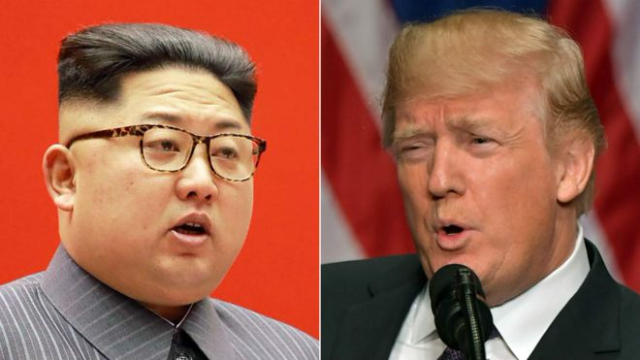 The US has expressed surprise at the "dramatic" shift in stance by North Korean leader Kim Jong-un that has seen President Donald Trump agree to talks.

US Secretary of State Rex Tillerson said it would take "some weeks" to set up a meeting, due to take place by May.

South Korean envoys had earlier briefed Mr Trump on the meeting they had this week with Mr Kim, saying he was now "committed to denuclearisation".

South Korea's President Moon Jae-in said the news of the Kim-Trump meeting had come "like a miracle".

"If President Trump and Chairman Kim meet following an inter-Korean summit, complete denuclearisation of the Korean peninsula will be put on the right track in earnest," he said.

China has welcomed the development, saying the Korean peninsula issue was "heading in the right direction" and calling for "political courage".

However, correspondents say the North has halted missile and nuclear tests during previous talks, only to resume them when it lost patience or felt it was not getting what it demanded.

What's the latest from the US?

Mr Tillerson spoke about the developments while in Djibouti on an African trip.

He said of Kim Jong-un: "What changed was his posture in a fairly dramatic way.

"In all honesty, that came as a little bit of a surprise to us, as well that he was so forward-leaning in his conversations with the delegation from South Korea."

n recent months, Mr Trump has belittled Mr Kim as the "rocket man", threatening him with "fire and fury", while Mr Kim has called Mr Trump "a mentally deranged US dotard".

Mr Tillerson said Mr Trump had been open to talks "when the time was right", adding: "In the president's judgment, that time has arrived now."

The secretary of state also drew a line between what constituted "talks" and "negotiations", although he did not specify the difference.

Just a day earlier, he had said the US was "a long way" from negotiations with the North, leading some commentators to suggest Mr Tillerson was out of the loop.

But Mr Tillerson said he had had a "very good conversation" with the president early on Friday morning.

President Moon Jae-in has acknowledged there are obstacles ahead. He is managing expectations and so much can go wrong.

His approval ratings took a hit during the Winter Olympics after he integrated the women's hockey team with players from the North and met a general from Pyongyang who had been accused of masterminding deadly attacks on South Koreans, though they have since rebounded.

These talks are a huge gamble with a communist state which is hard to read.

But if, just if, he helps pull it off, it may reduce the threat of nuclear war and he could win himself a Nobel Peace prize.

If all fails, it is back to brinkmanship.