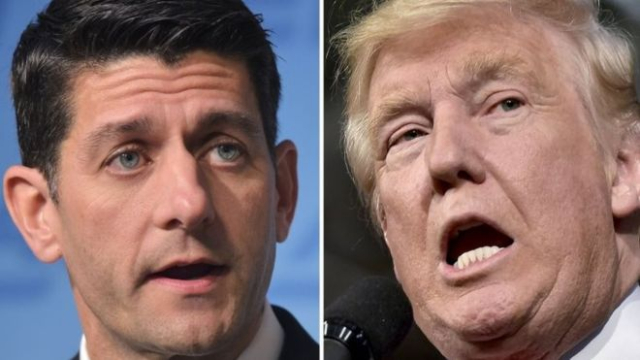 Mr Trump also said Republicans were coming at him "from all sides" and their disloyalty was harder to fight than the Democrats.

Mr Ryan is the latest Republican not to back Mr Trump after a 2005 video emerged showing him making obscene comments about groping women.

However Mr Trump has been strongly supported by running mate Mike Pence.

"You have nominated a man for president who never quits, who never backs down. He is a fighter, he is a winner," Mr Pence said at an event in Iowa, praising him for apologising during Sunday's debate for his lewd comments.

The renewed party divisions over Mr Trump come as a new PRRI/Atlantic poll suggested Mrs Clinton holds a 49-38 lead over her opponent.

A video released on Friday revealed Mr Trump describing how he had sought to have sex with a married woman and making other sexually aggressive comments about women.

Nearly half the 331 incumbent Republican senators, House members and governors have condemned Trump's lewd remarks on the video and about 10% have called for him to drop out of the race, Reuters news agency reports.

Mr Trump fired back in a string of tweets, saying the "shackles" had been removed, allowing him to "fight for America the way I want to".

He also attacked Senator John McCain, who has denounced Trump's conduct and faces a close re-election battle, as "foul-mouthed"

Though the latest revelation underscores a widening divide within the Republican Party, some members insist they are sticking by Mr Trump.

If the Republican Party, led by Speaker of the House Paul Ryan, follows through with its promise to abandon his campaign in hopes of preserving its congressional majority, he appears willing to burn it to the ground and salt the earth.

That was the takeaway from the Republican standard-bearer's unprecedented Tuesday morning Twitter storm. Reportedly delivered from the confines of his eponymous tower in New York, Mr Trump lashed out at a party establishment that never really wanted him as its nominee and only grudgingly backed him in the hopes that he was a force they could control.

That was a misguided belief.

Mr Trump sees himself as bigger than the party whose primary voters he courted, and now he will open fire on perceived enemies who surround him. Democrat Hillary Clinton, in a new television advert, lacks the "stamina" to lead. Mr Ryan, he tweeted, is "weak and ineffective".

Mr Trump, in his own words, is "unshackled" at last. In 2008 Republicans fretted that their vice-presidential candidate, Sarah Palin, had "gone rogue" and was woefully off-message. Eight years later, an entire presidential campaign has become unmoored and is threatening to rage against the fabric of their party.

New Jersey Governor Chris Christie said he was "really disturbed" by Mr Trump's comments about women but still planned to support him, saying the election was "about bigger issues than that".

Texas Senator and former rival Ted Cruz also said he would still cast his ballot for Mr Trump, telling a Texas TV station that Mrs Clinton was an "absolute disaster".

Another rival from the primaries, Senator Marco Rubio, said he would also back Mr Trump.

Meanwhile, Republican National Committee Chairman Reince Priebus held an emergency call with members on Monday to declare the party would stand behind Mr Trump despite recent turmoil, US media reported.