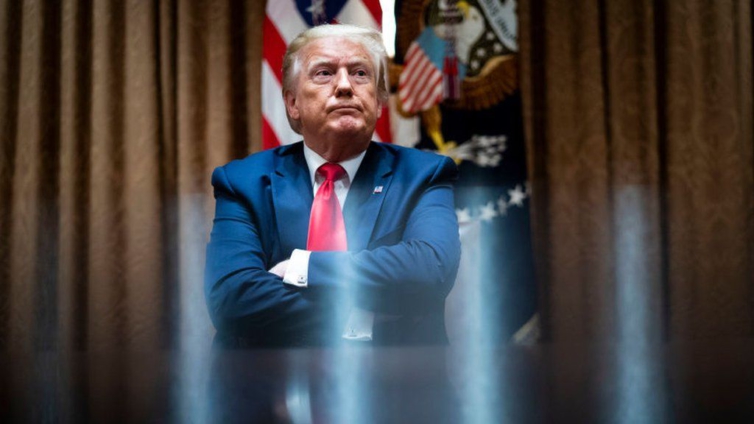 US President Donald Trump says he will “not even consider” renaming military bases named for Confederate generals.

He tweeted that the facilities were part of “a Great American heritage”.

Mr Trump’s remarks follow reports that top military officials were open to changes amid nationwide soul-searching after the death of George Floyd.

For many, symbols of the Confederacy – the slaveholding southern states that seceded, prompting the 1861-65 American Civil War – evoke a racist past.

Mr Trump tweeted on Wednesday that bases named for Confederate generals “have become part of a Great American heritage, a history of Winning, Victory and Freedom”.

He added: “The United States of America trained and deployed our HEROES on these Hallowed Grounds, and won two World Wars. Therefore, my Administration will not even consider the renaming of these Magnificent and Fabled Military Installations.

“Our history as the Greatest Nation in the World will not be tampered with. Respect our Military!”

White House press secretary Kayleigh McEnany told a news briefing afterwards that the possibility of renaming those bases was “an absolute non-starter” for Mr Trump.

She said he would not sign any legislation that Congress might ever pass requiring such name changes.

On Monday a Pentagon official said Defence Secretary Mark Esper and Army Secretary Ryan McCarthy were “open to a bipartisan discussion on the topic” of removing Confederate names from the bases.

Earlier this week, the US Marine Corps issued an order for commanders to “identify and remove the display of the Confederate battle flag or its depiction within workplaces, common-access areas and public areas on their installations”.

In an op-ed on Tuesday backing the idea, retired four-star US Army general David Petraeus wrote of his time at Fort Bragg: “The irony of training at bases named for those who took up arms against the United States, and for the right to enslave others, is inescapable to anyone paying attention.”

The 10 bases named for Confederate generals include well-known installations such as Fort Bragg in North Carolina, Fort Hood in Texas and Fort Benning in Georgia.

They are all located across the US South predominantly in states that helped deliver Mr Trump’s victory in 2016, and he is relying on them to support him again in November’s election.

DISCLAIMER: The Views, Comments, Opinions, Contributions and Statements made by Readers and Contributors on this platform do not necessarily represent the views or policy of Multimedia Group Limited.
Tags:
Confederate base
Trump