Trump’s call for ‘end’ of constitution condemned by Democrats 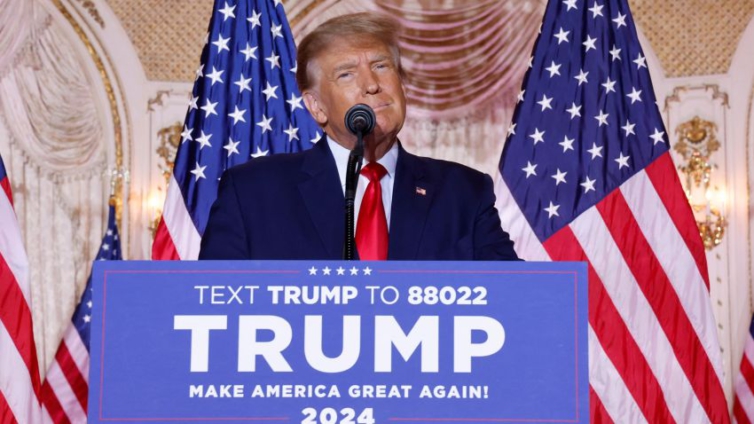 The White House has condemned former President Donald Trump after he called for the “termination” of the US constitution.

Mr Trump made the comments in a post to his Truth social network on Saturday while repeating his false claim that he won the 2020 presidential election.

He also accused “Big Tech Companies” of colluding against him with Democrats.

“You cannot only love America when you win,” Mr Bates said in a statement.

He added that Mr Trump’s comments should be “universally condemned” – seemingly a pointed jab at senior Republicans who have so far avoided criticising the former president’s outburst.

Other senior Democrats also challenged Republicans – including Rep Eric Swalwell who questioned how the party’s members could continue to refer to themselves as “Constitutional conservatives” if they didn’t condemn the comments.

In the post, Mr Trump referred to vague allegations of “massive & widespread fraud and deception” and asked whether he should be immediately returned to power.

“A Massive Fraud of this type and magnitude allows for the termination of all rules, regulations, and articles, even those found in the Constitution. Our great ‘Founders’ did not want, and would not condone, False & Fraudulent Elections!” he said.

The post came just hours after Twitter’s internal deliberations around limiting a 2020 story about Hunter Biden were revealed.

The story, which came weeks ahead of the 2020 presidential election, was published by the New York Post and revealed the chaotic personal life and business dealings of President Joe Biden’s youngest son.

Twitter initially blocked the story because of a company policy on hacked and stolen materials, and the leaked emails showed confusion and disagreements among staff as they scrambled to respond.

The files – which the BBC cannot verify – were published on Twitter by Substack writer Matt Taibbi on Friday night.

But last week, Twitter owner Elon Musk hinted that he would release the information, writing on the platform: “This is necessary to restore public trust.”

The billionaire defended the move in a Twitter spaces live stream on Saturday, but he accepted there may be a “legal risk” to his decision.

“We’re just going to put all the information out there try to get a clean slate,” Mr Musk said. He added that legal risks were “less of a concern than just clearing the air and making sure that people know what really happened”.

Mr Trump announced his third presidential bid last month and is a frontrunner to seal the Republican nomination in 2024.

But he has come under fire this week after dining with a known white nationalist and Holocaust denier at his Florida home.

Mr Trump said he was not aware that the man would be present and said he had accompanied the rapper Kanye West – who earlier this week expressed admiration for Adolf Hitler and has been accused of a host of antisemitic comments.

DISCLAIMER: The Views, Comments, Opinions, Contributions and Statements made by Readers and Contributors on this platform do not necessarily represent the views or policy of Multimedia Group Limited.
Tags:
Democrats
Trump