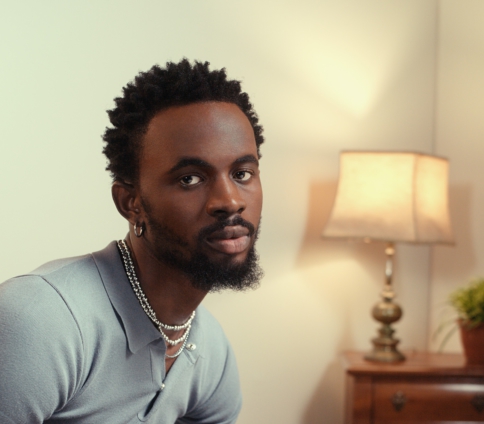 Rapper, Mohammed Ismail Sharrif popularly known as Black Sherif released his debut album, The Villain I Never Was, on Thursday to critical acclaim with the songs touching on a variety of topics.

The running theme throughout was struggle and the basic instinct to survive in a harsh world. However, in a rather uncommon twist, Blacko gives us an in-depth glimpse into his love life, which really isn’t as rosy as you’d expect of a budding superstar.

In three tracks, one following the other, Blacko surgically analyses his first relationship; he explores issues of vulnerability and insecurity with his first love, sex, break-up and the death of a loved one.

To begin this journey through Blacko’s thorny love life, we start with Toxic Love City – Track 10.

Toxic Love City is a mellow song that immediately introduces us to Blacko’s insecurities and vulnerability with first love.

He starts the song by asking:

Will you only be here for the higher days?
When the sweet times are over are you gonna stay?
Had to ask you early girl I know I’m late

He goes straight to the point, no dilly-dallying. It isn’t uncommon for one to ask oneself these questions when they start a new relationship, especially when it’s their first and they feel like their life is being upended by this barrage of new unfamiliar emotions. Clearly, at the point of asking these questions, he is long crippled in love and fears the worst.

In the next lines he voices his fears and his dependence on whatever assurances she can possibly give that she feels exactly the same way he feels about her, just for mental health reasons.

Comparing his doubts to death and in a rather manipulative way, he asks her to give him, at least, fake assurances to bring him back to life. This to me is classic gaslighting to get the girl to over-prove her love for you while you still deny she loves you; probably, a defense mechanism to make the lover look like the needy and clingy one when in reality you are.

But if you tell me something then I’ll be okay
It’s nice to have you but I can’t continue with these thoughts in my head
You can bring me back to life with just a word I need those fake assurances, e dey keep me very sane

As I had earlier stated, there’s struggle and the need for survival sprinkled throughout the album, and this song was also not spared. He talks about being an early bird, catching the worm.

In the next lines, he shows a commitment to being a provider for his lover; food, shelter, and sex (what did you think he meant when he said “Watch your back and give you that D D when you want it”?) He makes it clear he wants nothing from her just her assurance, her commitment to him, and the way she complements him.

In the second verse, Blacko prods his insecurities about his vulnerability with his lover even more. He tells us he has mistakenly made his lover aware that she has him wrapped around her finger like a ring. Not surprising really, Blacko is currently the king of oversharing in Ghana’s entertainment industry and we love that for him and for our ear buds.

But then the thing with oversharers is that they’re very paranoid. You dare not make a joke about something that is remotely similar to a scenario they had shared with you or else they begin to think you’re probably mocking them.

And Blacko proves the point when he says;

Then he goes on gaslighting and guilt tripping his lover into staying with him, lol, no be small micro aggressions. Because why is he making it look like he was forced into his situation with her? And why does he make it feel as if he has the most to lose by staying in the relationship?

From the above, it’s quiet clear who exactly was living in whose toxic city. It surely wasn’t Blacko. Even if it was, it was one he built and plastered with his own insecurities and a pinch of narcissism.

In the next installment of his trilogy of love, Blacko seemingly attempts to break up with his lover, but in classic narcissistic style. He says; Don’t forget me – Track 11

The lyrics of Don’t forget me can easily be mistaken for a death premonition. You know, like those musicians who predicted their own deaths in their music, example, Tupac Shakur. Because, why is Blacko talking about “Even when they get to take my life”? Who is going to take his life? Is he receiving death threats? Or he’s just being dramatic?

For the purpose of this article I choose that he’s being dramatic like he was in Toxic Love City. If you want to break up with a girl, break up with her in peace. Why does she need to be keeping sweet memories of you even long after? And why are you telling her you will come back?

And the interesting part about the song is that, he never actually breaks up with her, he’s planning to but he doesn’t yet do it. You know, like a Japanese death penalty, it will come like rapture. So he says;

The following verse, as if he’s now settled on really breaking up with her, suggests whatever is happening is merely temporal and that he’ll be back for more good times. He then throws in the eerie death premonition-like line and goes his merry way.

But you know this is not the end

You will be in my arms

Even when they get to take my life

Heaven is not far away

We’ll have a good time

Then the final verse, as if to placate his lover, he decides she should rather do the leaving.

But I need you to go

You and I know!

I’m not from this side

And I need to go back

I no fit stay here for long

There is a somewhat deep sense of sadness in Don’t forget me. It’s like an appetizer to the main sad course, Oh Paradise – Track 3, where Blacko recounts the death of his lover, broken promises and let’s his grief flow.

Oh Paradise is a song about his first love, Clementina Konadu (Tina) who had died following an outbreak of H1N1 infections in Kumasi Academy in 2017. She was the last of four who had died that year.

In an interview in 2021, the musician had described the experience as crazy.

“It’s crazy, that was the first time I cried about someone dying. I didn’t want to cry but the tears just flowed,” he said.

Blacko in Oh Paradise channels the average Ghanaian auntie’s audacity to reprimand the dead for dying (as If the dead intentionally wanted to die, lol). His very first line is a reprimand to Tina for dying suddenly;

The following lines describe the confusion and the somewhat oblivion the students of Kumasi Academy and their parents/guardians had been in concerning the disease outbreak. At the time, if you’d recall, there wasn’t much explanation about what was leading to the mass infections and at first there was no real sense of urgency to get to the root cause of what was happening. It was only three days after Tina’s death that it was confirmed by the Health Minister that the outbreak was H1N1.

Students were being rushed to hospitals, most returned, but a few didn’t. It thus comes as no surprise that Blacko says he had stayed up all night awaiting her text which never came.

Still channeling audacious Ghanaian auntie energy, he forgives her and wishes her well on her journey.

In the following verse he sort of justifies why Tina’s untimely death feels like he has been wronged. His hard won love stolen from him so suddenly.

He then asks Tina to intercede on his behalf, to aid him from above as he charters the tempestuous seas of life.

But he doesn’t end there. His grief draws out memories, memories of broken promises, youthful exuberance and young love. He’s reminded of what he’s lost and would never regain.

In conclusion, these three songs are a rollercoaster ride of emotions that paint a clear depiction of Black Sherif’s not-so-smooth, not-so-sweet love life. It’s really understandable why he’s a certified sad boy.

The author, Cornerlis Kweku Affre works with Myjoyonline.com under The Multimedia Group.