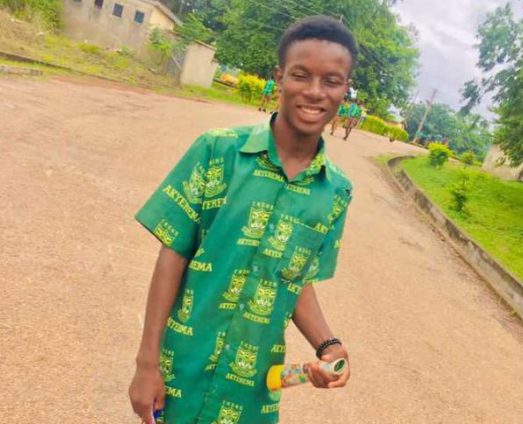 Family of a final year student at Tweneboah Kodua SHS who jumped to death has accused authorities of the School of failing to act when the boy fell.

The family together with the CID and the School authorities visited the scene of the incident today.

The father got emotional upon getting to the scene.

Edward Duut, 19 years, is alleged to have scaled a wall to avoid a routine check by the Prep Master, but landed with his chest on the ground, getting hurt in the process.

His father, Larry Duut, recounts he received a distress call asking him to show up on campus to check on his injured son.

He instructed the caller to give the phone to the son, Edward Duut.

“Daddy, I am injured, I am injured and feeling dizzy and I can’t talk again,” the last words he will hear from his son.

Mr. Duut says when he later arrived at the school, he was told his son died after scaling a wall to avoid a routine check by the Prep Master.

But the father is not satisfied. He questions why his child was left unattended several hours before he was rushed to the hospital.

“I called my son’ on his phone around 11:30pm when a friend picked and took the phone to him. When I asked him what has happened, he said he is injured and feeling dizzy.

I asked him about the teachers and he told me he can’t talk again. And that’s the last word my son could say. When I got there my son has died.”

Edward later died at Kumawu Polyclinic in the Ashanti region.

The distressed father says the mother was also rushed to the hospital upon hearing the death of their first child of five.

The mother was eagerly awaiting to see her son come home after completing the final WASSCE paper.
“My wife wouldn’t have been able to speak if she was to be here.

All that she said was my son and his friends were writing exams, they would come home without my son after the exam, but his dead body “

Family head, Paul Duut, is not convinced about the Police report.

The Kumawu District Police says a postmortem will be carried out on Friday to ascertain the cause of death.