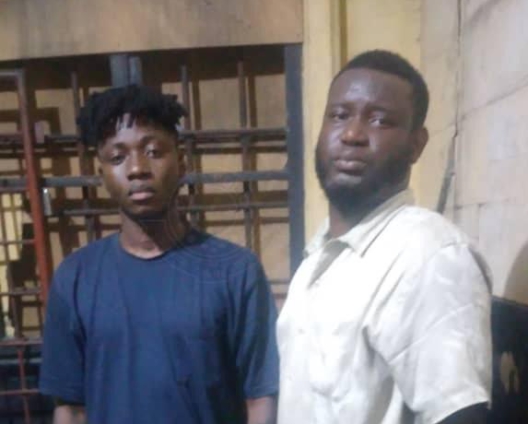 The Ghana Police Service has arrested two individuals for their involvement in the circulation of falsified information on the alleged gunshot attack on reggae/dancehall artiste, Shatta Wale.

They are being charged with intention to cause fear and panic, as well as partaking in a hoax.

According to Police report, findings revealed that the “widely reported gunshot attack on Shatta Wale on Monday, October 18, 2021 was a hoax.”

In view of this, the Police indicated that its outfit is in pursuit of the “Already” hitmaker and one other person popularly referred to as ‘Deportee’, for their possible involvement and knowledge of the circulation of false information with the intention to cause fear and panic.

“No one will be spared if Police investigations point to their possible criminal culpability in this matter.

“We want to caution any individual or group to desist from making false claims and engaging in acts, capable of disturbing the peace of the country because the law will come after you,” the Service assured.

Meanwhile, the founder and leader of New Life Kingdom Chapel International, Bishop Stephen Akwasi whose prophecy was the reason for the prank has also been arrested.

In a video circulating on social media, the Bishop predicted that Shatta Wale would pass away on October 18, in a similar manner that led to the death of South African reggae artiste, Lucky Dube, in 2007.

His arrest comes after Shatta Wale in a Facebook post in the early hours of Tuesday, stated that he was on the run due to threats issued against him.

The artiste stressed that his whereabout would remain unknown until the security agencies in the country take the necessary actions to secure his safety.

“This is not the first time I have had these threats in this country now I am going through these emotional trauma alone. My dad has even defended me on radio on this same issue. Why? Why? Ghana? Why? Yes, my life is in danger, and I am on the run till this country shows me there are laws…,”

The singer added that “This pastor said 18th October Shatta Wale will be shot, and you want to tell me you didn’t see from your cybercrime department, nor did you hear or came across anything like that online?