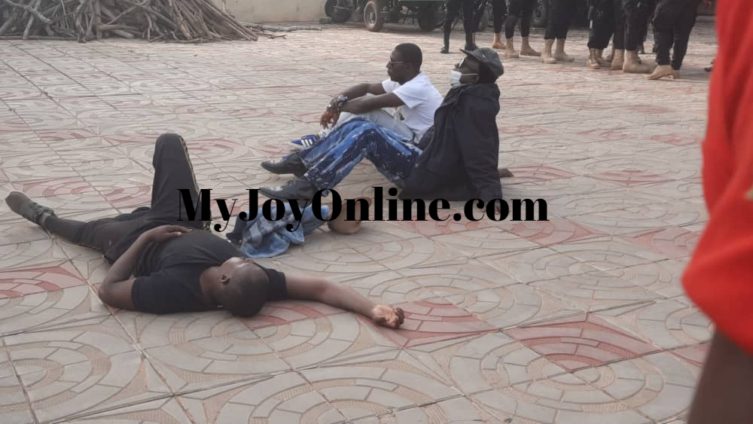 Two persons were allegedly shot during the installation of Osabarima Atiabisa Kantinka Pobi Asomaning, a parallel chief at Asamankese in the Eastern Region.

According to JoyNews correspondent, Edwin Kofi Siaw, the two were seen soaked in blood.

The enstoolment ceremony was characterized by sporadic gunshots amidst resistance from some residents who are believed to be followers of Osabarima Adu Darko III, a rival chief.

Whilst some residents pelted stones at thugs who facilitated security for the ceremony, others fled the tensed scene.

The gun-wielding thugs, before the ceremony, forcibly broke into the main palace threatening lives and property.

The presence of a Police team brought the volatile situation under control for the the enstoolment process to continue.

Some Chiefs and elders performed traditional rites including the slaughtering of a sheep and pouring of libation.

Osabarima Kantinka Pobi Asomaning in a speech after his enstoolment said, his legitimacy has been endorsed by a Koforidua High Court and the Akyem-Abuakwa Traditional Council.

“I want to tell my people to exercise restraint, we don’t need any disturbances. I pledged to use lawful means to resolve this issue and take what rightfully belongs to me and that’s exactly what I have done. Today is a very important day for us in Asamankese because this issue has been lingering for long. They lost all their cases at the High Court. They proceeded to the Eastern Regional House of Chiefs where they lost an appeal.

A protracted chieftaincy dispute between the two claimants has led to brewing tension in the area.

Osabarima Kantinka Pobi Asomaning says a High Court and the Judicial Committee of the Eastern Regional House of Chiefs have held that his rival Osabarima Adu Darko III is not the rightful occupant of the stool and cannot hold himself as such.

He indicated that he has notified all relevant authorities, including the Inspector General of Police of what he terms, “the continuous occupation of the palace” by the rival chief and petitioned the Presidency to intervene.