Two suspects on the run after stabbing student, 18, to death 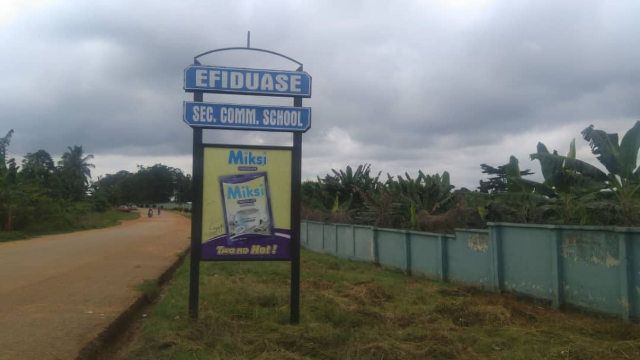 Police in Effiduase in the Ashanti region have launched a search for two armed men who stabbed to death, a final year Business student of the Effiduase Senior High School.

Derick Agyei, 18, died few hours after being rushed to the Effiduase Government Hospital's Emergency Unit after the armed men stabbed him in the neck on Wednesday evening.

Police say the deceased, in the company of a friend, had scaled the school's fence wall to watch a football match outside campus when the attack occurred.

The Effiduase District Commander, Superintendent Asare Bediako told Joy News the deceased’s friend, Douglas Obeng, 17, has since given the statement to police.

According to him, at about 7.30 pm on Wednesday, they received a complaint at the charge office about the stabbing.

Police say the two students were accosted by two men who demanded they hand over their mobile phones and all the money they had on them.

“Obeng had only ¢2 on him which they took away but the deceased refused to give them his mobile phone and money. So, they attacked him and he struggled with him.

“While resisting their attack, one brought out a knife and stabbed him in the neck. Douglas sensing danger bolted, but instead of going back to the school to report, he went ahead to watch the football game,” Supt. Bediako said.

At this point, the bleeding Derrick scaled back into the school campus but could not walk back to the dormitory.

He fell behind one of the boy’s dormitory and was discovered by a student who was on his way to the bathroom bleeding profusely.

“The student raised an alarm and was helped to take Derrick to the housemaster who rushed him to the hospital,” the District Commander narrated.

Douglas told the police he can identify his assailants so the police say they are on a manhunt to arrest the two.

Joy News’ Ohemeng Tawiah said the mood among the students as expected is a sombre one.

The headmaster and other teachers have gone to the house of the deceased to commiserate with them.