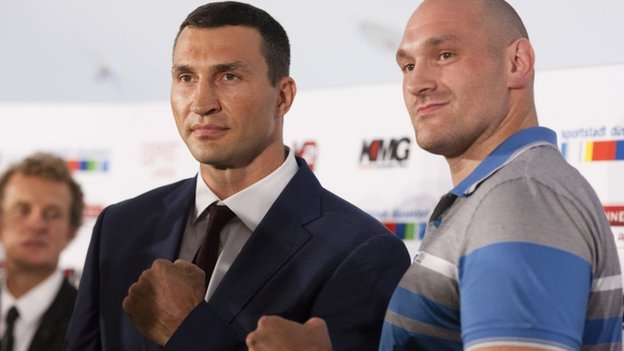 Tyson Fury has revealed that a sheikh wanted to stage a mega-money rematch between the world heavyweight champion and Wladimir Klitschko on his luxury yacht.

Fury and Klitschko have not yet agreed when or where they will return to the ring, but the Englishman said five venues are under consideration.

The 27-year-old said one offer from the Middle East in particular caught his attention, but the proposal appears to have hit the rocks.

"There are five possible venues. I'm hoping it's not going to go back to Germany. I'd rather go to Abu Dhabi or Qatar than there," Fury told the Daily Telegraph.

"We even had negotiations to have it on a cruise ship. There was a sheikh in Dubai who owned a yacht which would fit only 120 people on.

"He didn't want to broadcast the fight anywhere and he said he could sell 120 tickets at $1million each, so that would have been $120 million.

"He wanted to have an exclusive heavyweight championship of the world fight with no TV station, with just those 120 people watching.

"He didn't say how much I would get, but I probably would have had the biggest half of the $120 million – so I was all for it. I don't think it’s possible now, but it would have been an epic story.

"It shows that this is the biggest prize in sport. People want to be associated with the heavyweight champion of the world.

"You've got this newcomer in me who's taken all his belts and people want to see if Klitschko can redeem himself in the rematch. Wherever it ends up, I'm happy to go."