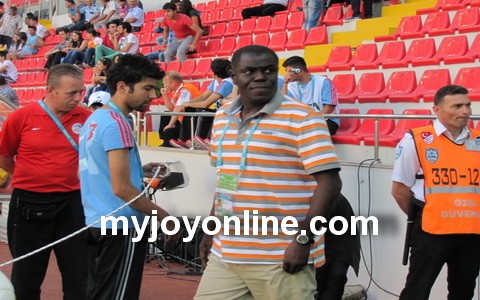 Sellas Tetteh is not new to controversy about his selection criteria.

The latest critic is BA United Chief Executive Officer Roy Arthur, who has expressed outrage at the exclusion of Stephen Anokye Badu from the Black Satellites 35-man provisional squad for this year’s World Cup.

The center back was the only player missing from Tetteh’s squad that played at the just ended African Youth Championship where the team finished third.

Anokye’s exclusion from the squad has been widely discussed in the last 48 hours, as his performances stood out from the rest. Arthur, in an interview with Joy Sports, fingered Tetteh for unfairness to the youngster.

“This is an issue that is really bothering me and I feel the selection process was not properly done because on what criteria will you drop Anokye?” lamented Arthur on Thursday's Joy Sports Center.

"This is a player who was a star performer during the qualifiers and the African championship but come to think of it most of the players he played ahead of who could not even make it to Africa have surprisingly found their way into the squad and I wonder on what basis was the selection done."

Sellas Tetteh will have to select his final 21-man squad from the provisional list for the tournament which will begin on May 30 to June 20.

"Can they explain the omission of Moses Odjer of Catania [and] Divine Naah of NAC Breda? Whoever scouted Emmanuel Boateng should have [also] even seen Alhassan Wakaso who plays week in week out,” he added.

“It is not only about Anokye Badu here but for me I feel the young man has shown consistency at club level and should have been in the squad.”

Public criticism of Tetteh's 35-man team also centers on the seeming focus on foreign-based players, many of whom are not regular, to the detriment of local stars who play a lot.

It is unlikely that Tetteh would respond, given his track record of ignoring such comments in the past. The most famous of such cases is the exclusion of then-hotshot midfileder Ishmael Yartey from the 2009 World Cup.

Bribery allegations were leveled at the former Liberty Professionals boss, but he eventually shut his critics up with winning the trophy.