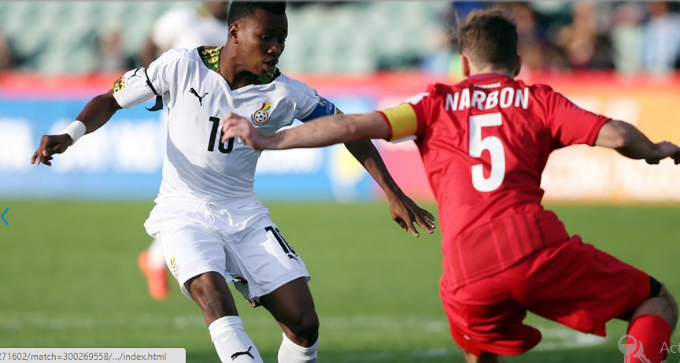 Ghana has topped Group B and are through to the round of 16 stage of the FIFA U-20 World Cup with a 1-0 win against Panama.

Emmanuel Boateng scored for the Black Satelites after 82 minutes when he came face-to-face with his last man after a defensive error from Panama.

Although Panama got a penalty 90 seconds to close of the cracker in Auckland, New Zealand Escobar failed to clinch a draw for the South American side.

All of Ghana's team wore black armbands to mourn the over 175 people killed in Accra after a petrol station blast and  flooding that overwhelmed the capital on Thursday.

Sellas Tetteh made one change from the team squad that beat favourites Argentina 3-2 on Tuesday, with Patrick Kpozo making way for Joseph Aidoo.

In post was Lawrence Ati-Zigi, with Kingsley Fobi, Patrick Asmah, Joseph Aidoo and Emmanuel Ntim making the back four.

Cagliari midfielder Godfred Donsah sat in front of the back four, while Asiedu Attobrah played ahead of him. Samuel Tetteh and Yaw Yeboah operated on the wings. Ghana is anxiously awaiting the results of an assessment for star man Clifford Aboagye after he was subbed at the interval. Sellas Tetteh could be without his influential midfielder for the next game after he was replaced by David Atanga.

Aboagye, 20, has been terrific for the Black Satellites after the clear void was felt in Ghana's opening game against Austria due to visa issues.

But he scored and provided an assist in the next game as Ghana scraped a 3-2 win over Argentina..

The scorer of the late goal, Boateng is a defender turned striker and had come on as a sub. His goal ensured the Black Satellites got seven points from three games in the tournament.

Elsewhere in Group B, Argentina drew goalless draw with Austria which means the record six-time winners from South America failed to win a single game in New Zealand.

Austria have five points and qualify for the second round alongside Ghana.