U.S. will extend border restrictions with Canada, Mexico until Oct. 21 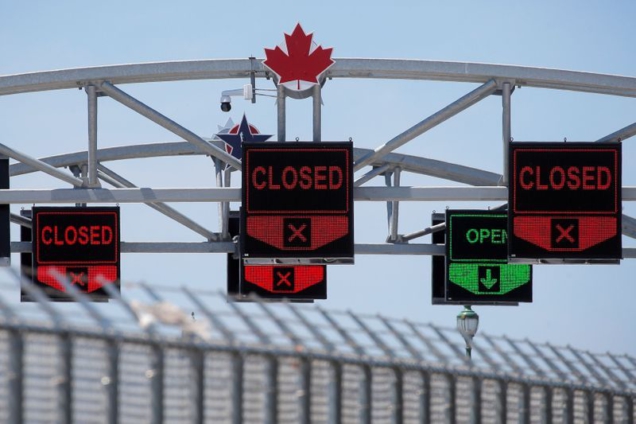 FILE PHOTO: A Canadian maple leaf is seen on The Peace Bridge, which runs between Canada and the United States, over the Niagara River in Buffalo, New York, U.S. July 15, 2020. REUTERS/Brendan McDermid/File Photo

The United States and Canada have extended existing border restrictions until Oct. 21 as authorities continue their efforts to fight the coronavirus pandemic, both nations said on Friday.

The month-long extension, which does not cover trade or travel by air, follows restrictions first imposed in March and rolled over several times. They were due to expire on Sept. 21.

The United States has similar restrictions on the border with Mexico and these will also now be in effect until Oct. 21, said Chad Wolf, acting secretary of the U.S. Department of Homeland Security.

“We continue to work with our Canadian and Mexican partners to slow the spread of Covid-19,” he said in a tweet.

Sources in Washington and Ottawa this week said the measures on the joint border would most likely have to be rolled over until at least the end of November due to Covid-19.

The United States is the worst-affected nation in the world.

The Centers for Disease Control and Prevention on Thursday reported 6,613,331 cases of the new coronavirus and said the number of deaths had risen by 1,224 to 196,277.

Cases have also started to spike in Canada, where the chief medical officer said on Thursday that authorities could potentially lose the ability to manage the pandemic.