Udercover story (3): ‘Stubborn’ girls forced to sleep with clients in their menses 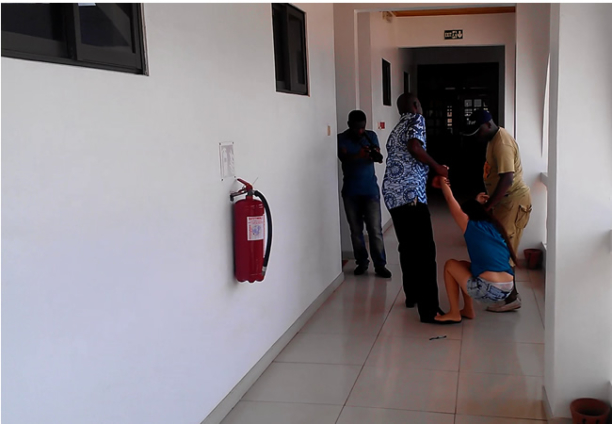 The New Crusading GUIDE can report that the six Vietnamese girls trafficked into Ghana by their Chinese sex slave masters; Hwang Se Hui and Cz Tian Ping, were subjected to gross physical abuse and death threats by their slave masters whenever they proved difficult in offering sex to their clients.

In the line of their work, there were no excuses for refusal or non performance. The general rule was that at any time of the day, so far as a client was ready, any girl of his choice had to be available; more so when payment had being made to the traffickers; Hui and Ping.

There were times when these girls had genuine reasons to be excused, either after servicing so many clients or being in their menstrual period; but as it turned out; that was not enough a reason for them to be labeled ‘unavailable.’

“Not even the fact that we were in our menstrual period was enough an excuse not to be ready for our numerous clients, much less having headaches however severe they were,” the rescued girls said in an interview.

When any of the girls refused to satisfy a client for any reason, she was subjected to a brutal physical abuse session at the hands of Tian Ping; whose habit was to beat the stubborn girl with anything within her reach.

Any girl who needed to use being in her menses as an excuse of unavailability had to be subjected to a thorough search of her private parts particularly by Tiang Ping.

Some of the girls recount how Ping on some occasions went as far as forcibly tearing their clothes and underwear to ascertain that they were really in their menses. Whether or not a sick girl can service a client is the sole prerogative of the traffickers.

“The last time I told her I was in my menses she asked me to remove my panties she took out the pad and inspected it before giving it back to me. Sometimes the clients even have pity on us”.

Girls are usually allowed a day off. Being off duty comes after a girl has slept with so many men over a period of time and is therefore allowed to rest, usually to sleep for a full day.

The physical abuse episode started very early on when they arrived in Ghana, and were camped in a house at Tema.

It started when the girls realized they had been shortchanged by their recruiters turned traffickers and protested; the only answers they ever got were continuous physical abuse; in worse cases usually accompanied with death threats.

"When they realize that the physical assault was not bringing the desired results of getting us to be quiet, they began to threaten us with death saying that they have nothing to lose whiles our families would never set eyes on us again,” one traumatized girl said.

“We once went and reported to the Tema police and nothing happened. Nobody helped us.”

For long periods of time, they wept and sorrowed to no avail because their passport and travel documents were seized upon arrival at the Kotoka International Airport. Their main job in Tema was to service clients in their hideout during the day and go to the casino (name withheld) at night, where they were forced into prostitution.

These girls were in servitude and remained bonded to their slave masters. The only condition for the release of passports was after they have worked hard enough to repay the full cost their journey from Vietnam to Ghana, and a profit ercentage only known by the traffickers.

After about two and half months of protestations, the six stubborn girls out of the initial sixteen girls who were trafficked into Ghana, were transferred to Takoradi and sold to Se Hui and Tian Ping.

The rooms at the Jang Mi Guest House are all numbered and a check of the rooms revealed a stash of pornographic materials in each room. The girls revealed that they are forced to watch pornographic clips and movies in order to apply same when they meet clients.

All expenditures borne on their upkeep, from feeding, buying of sanitary materials, clothing etc. was based on how much money a girls rakes in. The traffickers at times go as far as deciding for these girls what they eat.

The victims were working to take care of themselves whiles the traffickers accrued the profits off their exploitation and laundered it out of Ghana as reported in the second installment of this investigative exposé titled; ‘The Sex Money Trail,’ published in the Thursday March 13, 2014 edition of the New Crusading GUIDE newspaper.

When a girl fell sick, the traffickers would give her ‘Chinese robb’ – a popular ointment to smear mostly behind her ears and her forehead. Then she would be given a mixture of Chinese drugs by the traffickers. Exhibits of these drugs were confiscated by the Police during the raid.

The girls revealed that they had little say on issues to do with their health. Being sent to a hospital or a clinic was out of the question and they were usually forced to take drugs given to them by the traffickers.

The rescue of these six girls came in the wake of an investigation by our undercover reporter, Anas Aremeyaw Anas; who got evidence on how these Vietnamese girls were being trafficked sexually.

That episode was earlier reported in a story on this exposé headlined: ‘Trafficked and Abused,’ published in the Tuesday March 11, 2014 edition of this paper.

The girls are currently in the custody of the state whiles the alleged traffickers are being arraigned for court by the police on possible charges of human trafficking, money laundering and tax evasion.

Meanwhile, the search is still on for the kingpin in this trafficking ring and this paper would keep our readers updated on any new developments.