UENR launches 10th Anniversary celebration; aims to be among Africa's top universities in next decade - MyJoyOnline.com

UENR launches 10th Anniversary celebration; aims to be among Africa’s top universities in next decade 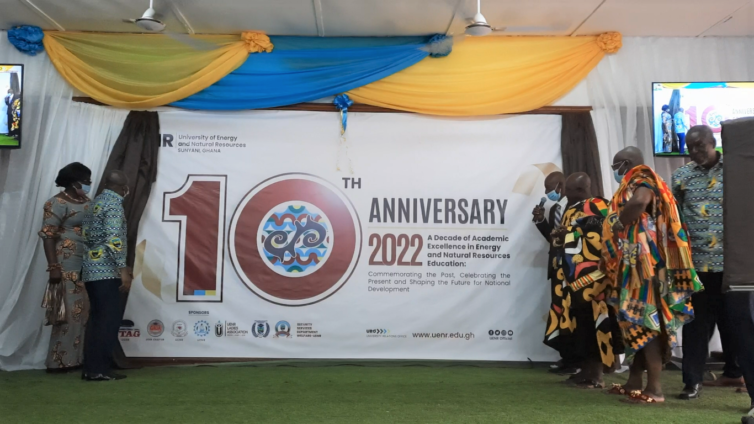 The University of Energy and Natural Resources (UENR) in Sunyani says it is working to position itself among the top universities in Africa and beyond in the next decade.

According to the Vice-Chancellor, Prof Elvis Asare-Bediako, research in areas such as energy, natural resources, health, and technological innovations with the capacity to support national development drives the vision.

He said if they can develop such technologies, then they would be on the path to becoming a top-class university in the world.

In terms of renewable energy, the VC emphasised their role as they continue to train students who are occupying various positions in energy-related institutions.

“We recently inaugurated a center for applied biology research to contribute research into the health of the people for proper economic development,” he said.

“In ten years, UENR will be one of the top universities in Africa if not in the world”, he insisted, adding that “we have a very competent academic and administrative staff that are working towards this goal”.

He, however, said they have infrastructure deficits. “We hope the government will come to our aid. But we are not only waiting for the government. Within the university, through internally generated funds, we are also trying to come up with some of these infrastructures”.

Prof Elvis Asare-Bediako was speaking at the 10th-anniversary launch of UENR in Sunyani on the theme, “A decade of academic excellence in energy and natural resources, commemorating the past, celebrating the present, and shaping the future for national development”.

The university has opened two other campuses in Dormaa-Ahenkro (school of Agriculture and Geo Sciences) and Kenyasi in the Ahafo Region, which is ready to be operational from the next academic year (School of Mining and Builds Environment). Another campus at Nsoatre is expected to start soon.

Bono Regional Minister, Justina Owusu Banahene, said this could not have been achieved on a silver platter, but by dint of hard work, vision and persistence, hence, commended the Governing Council and Management, both past and present, for their commitment to bring higher education to the doorstep of people of the Bono Region and beyond.

She said the entrepreneurship program run by UENR to help graduates to become job creators instead of job seekers is the kind of education the current youth need to be efficient and functionally useful.

“I wish to request that as far as practicable, the institution should make the study of entrepreneurship a compulsory part of the courses of study of every student, no matter his/her program of pursuit, so that they can each have a fair idea of how to set themselves up in the job market upon completion of their university education”.

The minister assured that the government is determined to work together with the country’s tertiary institutions in a bid to find solutions to the many challenges that face the educational sector.

On her part, the first Vice-Chancellor of UENR, Prof Esi Awuah, expressed worry over the lack of self-discipline in waste disposal in the country, a situation she said if not checked will have serious consequences on food security.

If we continue our careless behavior of throwing plastics anywhere, a time will come that there will be no food. She charged UENR and the various Assemblies to work towards keeping the cities clean.