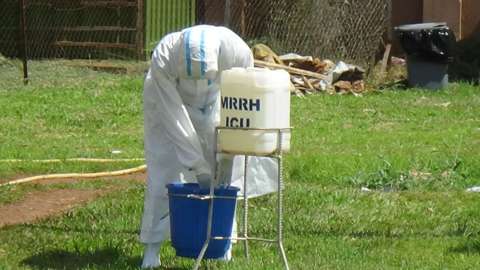 Medical interns at Uganda’s Mubende hospital have gone on strike, accusing the government of not providing them with appropriate safety kit, risk allowances and health insurance.

The hospital, located some 150 km (95 miles) from the capital, Kampala, is hosting the main isolation centre for Ebola patients as the outbreak continues to spread in the central region.

All 34 interns, including doctors, pharmacists and nurses said in a statement that they would not return to work and want to be evacuated to a facility with safer working conditions.

Six intern medical workers are said to have been exposed to the virus and are currently in isolation awaiting laboratory results.

Authorities say there have been at least 36 suspected Ebola cases, although not all have been confirmed.

At least 23 deaths are suspected to have been caused by the virus.

An outbreak of the Sudan strain of Ebola was declared in the country last week.

The first confirmed death was a 24-year-old-man, who lost six members of his family in the first two weeks of September.

Available vaccines against the haemorrhage-inducing virus can’t be used in Uganda because they are only effective in dealing with the Zaire strain which was behind the 2013 – 2016 outbreak in West Africa.

DISCLAIMER: The Views, Comments, Opinions, Contributions and Statements made by Readers and Contributors on this platform do not necessarily represent the views or policy of Multimedia Group Limited.
Tags:
Ebola
Medical workers
Mubende hospital
Strike Action
Uganda