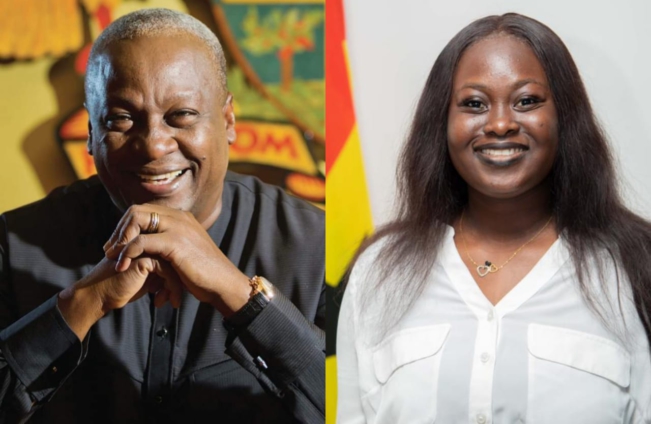 The NDC’s students wing at the University of Ghana, TEIN-UG, says it will support a lady widely perceived to be a relative of former President John Mahama, to become the next General Secretary of the Students Representative Council (SRC).

According to the association, the lady in question, Ernestina Mahama, is the most competent candidate for the portfolio, therefore their decision to rally behind her candidature.

Speaking in a yet-to-air interview on Joy Campus, the former TEIN-UG President, and an active member of the group, Raymond Edem Tamekloe noted that, his outfit has taken a keen interest in the upcoming SRC election.

TEIN’s interest in the polls, he said is due to the group’s vision of ensuring that its ‘competent members’ are well-placed in the governance of students at the University.

“I’ve listened to all the Secretarial aspirants. I’ve listened to their policy documents and all of the things that they say they’d want to do and I can tell you for a fact that TEIN is resolutely in support of Ernestina Mahama”, he told host, Paa Kwesi Schandorf on Tuesday.

Mr Tamekloe added that, TEIN-UG is also rallying support for all of its members who are aiming for the SRC presidential portfolio.

On that note, he said even though there are a number of TEIN members vying for the SRC presidency, he believes that one of the candidates, Mr Samuel Ackom, is likely to get the backing of TEIN-UG due to the ‘clout’ of his campaign.

Still on the elections, he accused the governing New Patriotic Party (NPP) of using state machinery to bully its way through SRC elections at the University of Ghana.

This he said, is the reason TEIN-endorsed candidates have not been able to win election at the University of Ghana, over the last couple of years.

He however noted that, his outfit will resist any of such attempts in this year’s election, which has so far gathered a lot of momentum at Ghana’s premier university.

Mr Tamekloe’s interview with Paa Kwesi Schandorf will air on this week’s edition of Joy Campus on Sunday, September 4, on the JoyNews channel at 11:00am.

The interview will also focus on other intriguing developments, relating to this year’s SRC election at the University of Ghana.

Meanwhile, the Public Relations Officer of the Electoral Commission of the SRC, Mr Bright Siaw, has revealed that the election, which was initially scheduled for Friday, September 2, has been postponed.

Speaking to JoyNews on Thursday morning, he noted that a new date will soon be communicated.

DISCLAIMER: The Views, Comments, Opinions, Contributions and Statements made by Readers and Contributors on this platform do not necessarily represent the views or policy of Multimedia Group Limited.
Tags:
Ernestina Mahama
John Mahama
Joy Campus
Raymond Edem Tamekloe
UGSRC Elections
University of Ghana