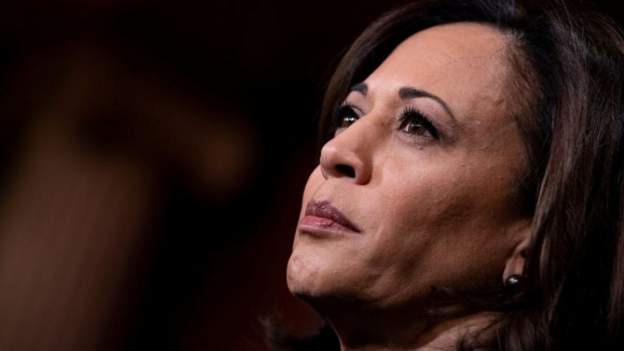 Ms Harris made history as the first female, first black and first Asian-American US vice-president

Northern Ireland peer Lord Kilclooney has come under fire for a tweet referring to US vice-president-elect Kamala Harris as “the Indian”.

Ms Harris, who, of course, is American, has an Indian-born mother and Jamaican-born father.

Lord Kilclooney posted on Twitter: “What happens if Biden moves on and the Indian becomes President. Who then becomes Vice President?”

A number of MPs have said the tweet was “racist” and it “beggars belief”.

When challenged, Lord Kilclooney claimed he had not known the name of the vice-president-elect when he was tweeting.

Lord Kilclooney is no stranger to controversy – in 2018, he called the then taoiseach (Irish PM) Leo Varadkar a “typical Indian”, which he later described as a mistake.

Ms Harris has faced racist remarks in the past. One study found that a quarter of the media coverage after Ms Harris’ nomination as vice-presidential candidate included “racist and sexist stereotyping and tropes”, including the “angry black woman” trope, and “birther” conspiracies that implied she was not born in the US.