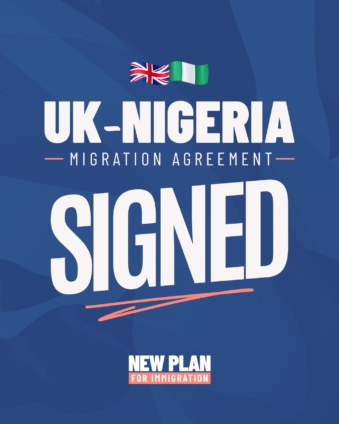 The UK has announced a deal with Nigeria to tackle illegal migration.

In a tweet, Home Secretary Priti Patel said the “landmark agreement with Nigeria will increase the deportation of dangerous foreign criminals”.

🇬🇧✍🏽🇳🇬 Our new landmark agreement with Nigeria will increase the deportation of dangerous foreign criminals to make our streets & country safer.

And take the fight to the criminal people smugglers together to tackle illegal migration.

The announcement on Thursday was made hours after the UK deported at least 10 Nigerians for alleged immigration-related offences.

Human rights campaigners in the UK had expressed concerns that members of the LGBTQ+ community, who had sought asylum in the UK, were among them.

People can be deported from the UK if they are not British citizens and have been convicted of a criminal offence.

Earlier this month, the European Court of Human Rights (ECtHR) cancelled the first flight due to take asylum seekers from the UK to Rwanda.

The flight was part of the Rwanda asylum plan, announced by the UK government in April, that sees some asylum seekers given a one-way ticket to Rwanda to claim asylum there instead.

The government said the scheme would discourage others from crossing the English Channel.