Ukraine conflict: Many misleading images have been shared online 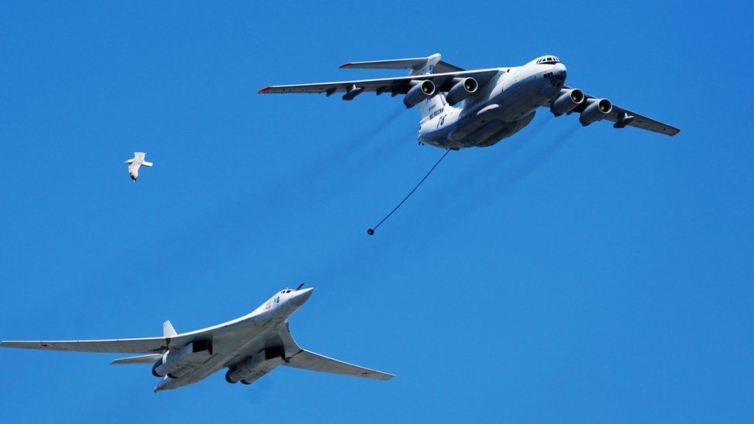 The Russian invasion of Ukraine has led to false or misleading videos and photographs being posted on social media claiming to be from the conflict.

Some of those checked by the BBC include footage from previous conflicts in Ukraine or elsewhere in the world, and images of troops on exercises.

Social media platforms such as Twitter seem to be taking a proactive role in confronting misleading content, removing several videos shown to be misleading by fact-checkers and researchers.

In the opening hours of the conflict, several videos claiming to be the Russian air force operating over Ukraine were posted and went viral on social media.

One clip, which has subsequently been deleted, shows a fighter jet flying over an urban area. It is accompanied by a caption which implies it was filmed in the current Ukraine conflict.

Closer inspection, however, reveals that the aircraft is an American-built F-16 Fighting Falcon, which has never been in service in either Russia or Ukraine.

A second clip shows formations of fighters and bombers flying over an urban area to the sound of air raid sirens.

Checks made by the BBC found that the footage showed preparations for a military parade flypast in 2020. The sound of an air raid siren had been dubbed over the original audio.

Another video clip claims to show Russian paratroopers landing near the Ukrainian city of Kharkiv.

It’s been viewed hundreds of thousands of times on Twitter, but actually first appeared on Russian-language internet in 2016.

A fourth clip shared widely on Twitter and YouTube is labelled as showing a Russian jet being shot down over Ukraine.

However, BBC journalists have seen this footage before. It’s a Libyan government aircraft being shot down by rebels over Benghazi in 2011.

Voices on the video can be heard celebrating in Arabic.

Some imagery does not show combat operations at all.

Footage of an explosion behind some apartment blocks claims to be from the city of Mariupol in south-eastern Ukraine.

Among those sharing the clip is the Twitter account of former Ukrainian ambassador to the US, Volodymyr Yelchenko.

However, a version of this video was uploaded to TikTok on 29 January, on an account which regularly posts images and film of explosions.

Further, as the caption to the video suggests in Russian, it shows the result of a lightning strike on a power station, rather than any military action.

Users have also questioned the greenery on the trees, with available data showing average February temperatures in Mariupol at around zero Celsius.

Some social media users have shared an image which claims to be of Russian troops raising a flag on the municipal building in the Ukrainian city of Kharkiv today.

While the caption is correct – it does show Russians hoisting the flag on that building in Kharkiv – reverse image search tools show that the event took place in 2014, during an earlier period of unrest.

Finally, a video shared by one Chinese-language Twitter account, with the caption “Putin the Great has attacked Ukraine” is easily recognisable as the explosion of a port building in Beirut in August 2020, which caused more than 200 deaths.

It is easily shared, often by those who believe the images to be genuine.

Social media users can limit the spread of disinformation by taking a few seconds before hitting the “share” button to consider whether what they’re seeing seems genuine and is from a source that they trust.

Most news organisations go to great lengths to verify footage before using it in their reports, so checking with multiple trusted sources before sharing will help to prevent these images from being widely shared.

DISCLAIMER: The Views, Comments, Opinions, Contributions and Statements made by Readers and Contributors on this platform do not necessarily represent the views or policy of Multimedia Group Limited.
Tags:
Fake News
Russia
Russia-Ukraine crisis
Ukraine