Ukraine crisis: Russian attack would be ‘horrific’, US warns 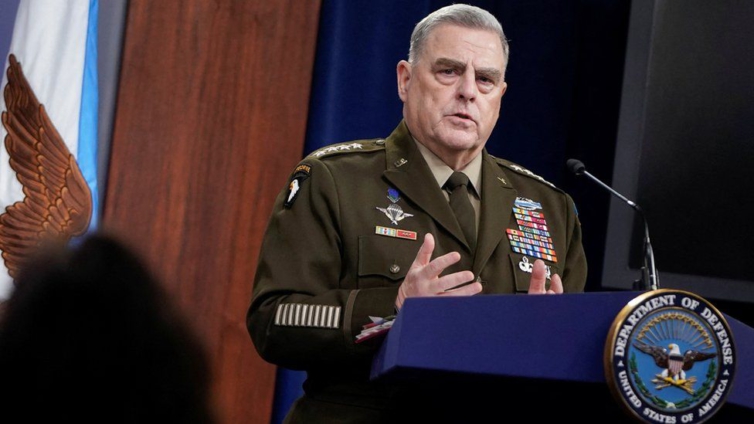 Top US General Mark Milley has said that a Russian invasion of Ukraine would be “horrific” and would lead to a significant number of casualties.

Gen Milley described the build-up of 100,000 Russian troops near Ukraine’s border as the largest since the Cold War.

But US Defence Secretary Lloyd Austin said conflict could still be avoided through the use of diplomacy.

Russia denies plans to invade and says US support for Ukraine is a threat.

At a news conference at the Pentagon on Friday, Gen Milley – US President Joe Biden’s most senior military officer – warned that the scale of Russia’s forces near its border with Ukraine meant an attack would have severe consequences.

“If that was unleashed on Ukraine, it would be significant, very significant, and it would result in a significant amount of casualties,” said the chairman of the joint chiefs of staff.

Fighting in dense urban areas would be “horrific, it would be terrible”, Gen Milley added.

US Defence Secretary Lloyd Austin said the US was committed to helping Ukraine defend itself, including by providing more weaponry.

“Conflict is not inevitable. There is still time and space for diplomacy,” Mr Austin said, calling on Russian President Vladimir Putin to de-escalate the situation.

“There is no reason that this situation has to devolve into conflict… He can order his troops away,” he added.

Also on Friday, President Biden said he would send a small number of troops to Eastern Europe in the “near term”, to strengthen the Nato presence in the region. He did not specify where they would be stationed or when they would arrive.

Earlier this week, the Pentagon said there were 8,500 combat-ready troops on alert, ready to be deployed at short notice.

The US has rejected a key Moscow demand that Nato rule out Ukraine joining the defence alliance – but insisted it was offering Russia a “serious diplomatic path”.

But he said he would study the US response before deciding what to do, according to a Kremlin readout of a call between Mr Putin and his French counterpart.

France said the two leaders had agreed on the need to de-escalate and that its President Emmanuel Macron had told Mr Putin that Russia must respect the sovereignty of its neighbouring states.

The warnings from the Pentagon come after Ukrainian President Volodymyr Zelensky told reporters not to create panic over the build-up of Russian troops on his country’s borders.

At a news conference in Kyiv, Mr Zelensky said he did not see a greater threat now than during a similar massing of troops last spring.

“There are signals even from respected leaders of states, they just say that tomorrow there will be war. This is panic – how much does it cost for our state?”

The “destabilisation of the situation inside the country” was the biggest threat to Ukraine, he said.

Russia last month made wide-ranging security demands from the West, including that:

The US and Nato responded by saying Ukraine had the right to choose its own allies, but offered Russia talks on missile placements and other issues.

If Russia were to invade Ukraine, it would not be the first time.

Russia annexed Ukraine’s southern Crimea peninsula in 2014. It is also backing rebels who seized large swathes of the eastern Donbas region soon afterwards, and some 14,000 people have died in fighting there.

DISCLAIMER: The Views, Comments, Opinions, Contributions and Statements made by Readers and Contributors on this platform do not necessarily represent the views or policy of Multimedia Group Limited.
Tags:
attack
Russian
Ukraine crisis
US General Mark Milley