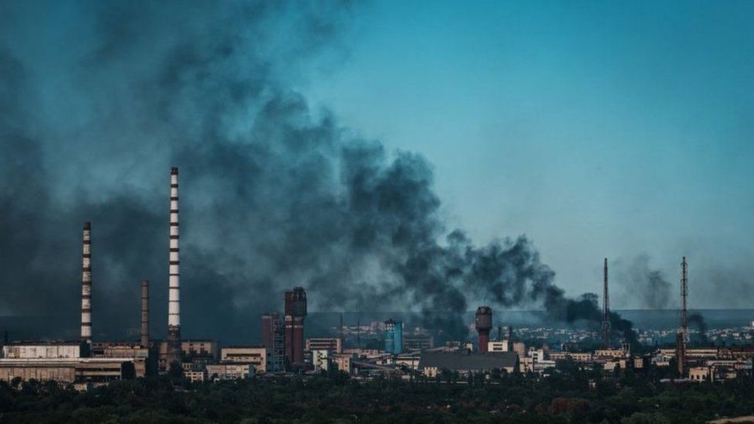 [Image Source: Getty Images] Smoke rises above the eastern Ukrainian city of Severodonetsk which is now believed to be mostly under Russian control

Thousands of civilians are trapped in the Ukrainian city of Severodonetsk with essential supplies running out, the United Nations is warning.

Many of them are sheltering in bunkers beneath the city’s Azot chemical plant.

The last bridge leading out of the city was destroyed in fighting earlier this week – effectively trapping its 12,000 remaining residents inside.

For weeks capturing Severodonetsk has been a top military goal for Russia, which now controls most of the city.

“The lack of water and sanitation is a big worry. It’s a huge concern for us because people cannot survive for long without water,” spokesperson for the UN’s Humanitarian Affairs office Saviano Abreu told the BBC.

Mr Abreu added that food supplies and health provisions were also running out in Severodonetsk, which is in Ukraine’s eastern Luhansk region.https://buy.tinypass.com/checkout/template/cacheableShow?aid=tYOkq7qlAI&templateId=OTBYI8Q89QWC&templateVariantId=OTV0YFYSXVQWV&offerId=fakeOfferId&experienceId=EXAWX60BX4NU&iframeId=offer_0e763acc7b457c03340a-0&displayMode=inline&widget=template&url=https%3A%2F%2Fwww.bbc.com

The UN is hoping to provide aid to those trapped in the city, but continued fighting means its agencies cannot get access or assurances to safely reach the civilians still there, including women, children and the elderly.

The warning followed Russian promises to open a humanitarian corridor earlier on Wednesday to evacuate civilians trapped beneath the Azot plant.

But so far there has been no confirmation that the planned safe route – which would have evacuated civilians into Russian-controlled territory to the city’s north – had actually gone ahead.

On Wednesday a pro-Russian separatist official accused Ukrainian forces of “completely thwarting” the evacuation of civilians trapped in the chemical plant.

“At Azot, militants are trying to disrupt the evacuation! From the territory of the plant, the militants have begun firing from a mortar and a tank,” Rodion Miroshnik, the “ambassador” to Moscow of the self-proclaimed Luhansk People’s Republic, said on Telegram.

The BBC has not been able to verify this claim.

Russian media outlets also blamed Ukrainian forces for the fact that civilians were trapped alongside its fighters in the plant – accusing them of using local residents as “human shields”.

Gazprom-owned NTV suggested there may be as many as 1,200 people, including children, trapped underneath the plant.

While civilians took shelter below the Azot complex, Russian and Ukrainian forces battled for control of the city above ground.

Capturing Severodonetsk would give Moscow command over almost all the Luhansk region, much of which is controlled by Russian-backed separatists.

In an update posted on Telegram the city’s mayor said that Ukraine was still in control of Severodonetsk’s eastern district.

“Efforts are being made to push the enemy back towards the city centre. It’s a permanent situation with partial success and tactical retreat in places,” Oleksandr Stryuk said.