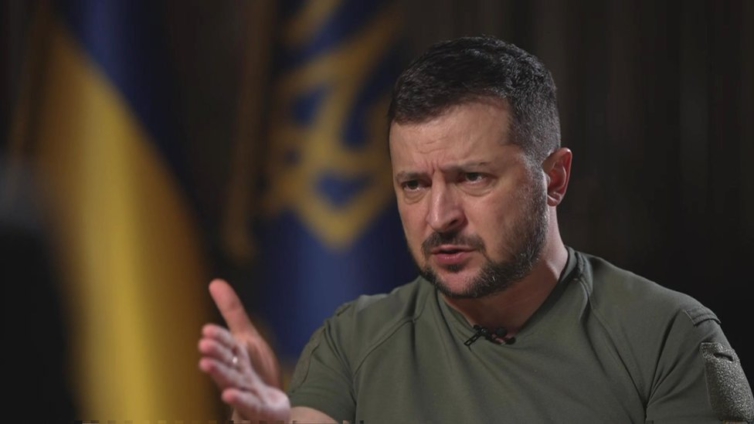 Ukraine’s President Volodymyr Zelensky says Russian officials have begun to “prepare their society” for the possible use of nuclear weapons, but added he does not believe Russia is ready to use them.

In an interview with the BBC, President Zelensky denied having urged strikes on Russia, claiming that an earlier remark had been mistranslated.

“You must use preventive kicks,” he said, referring to sanctions, “not attacks”.

In recent weeks, the Ukrainian army has recaptured large swathes of territory in a successful counter-offensive that has forced Russian troops to abandon long-held positions. In what Kyiv describes as Moscow’s response to its defeats, President Vladimir Putin has incorporated four partially occupied regions of Ukraine.

The annexations, widely dismissed as illegal, have raised fears of a possible escalation in the seven-month war. President Putin and other senior Russian officials have suggested that nuclear weapons – possibly smaller, tactical weapons – could be used to defend those areas, although Western officials say there has been no evidence Moscow is prepared to do so.

Speaking in English at the president’s office in Kyiv, President Zelensky said: “They begin to prepare their society. That’s very dangerous.

“They are not ready to do it, to use it. But they begin to communicate. They don’t know whether they’ll use or not use it. I think it’s dangerous to even speak about it.”

Then, in Ukrainian, he said through a translator: “What we see is that Russia’s people in power like life and thus I think the risk of using nuclear weapons is not that definite as some experts say, because they understand that there is no turning back after using it, not only the history of their country, but themselves as personalities.”

However, he denied having called for strikes on Russia during an online event on Thursday, saying the Ukrainian word he had used had been misunderstood.

The initial comment was denounced by Kremlin spokesman Dmitry Peskov as “an appeal to start yet another world war”, while Russian Foreign Minister Sergei Lavrov said it demonstrated why Russia was right to launch its operation in Ukraine.

“After that translation,” President Zelensky said, “they [the Russians] did their way, how it’s useful for them, and began to retranslate it in other directions.”

The interview happened hours after US President Joe Biden said that the Russian threat to use nuclear weapons had brought the world closer to “Armageddon” than at any time since the Cuban Missile Crisis during the Cold War.

President Zelensky said action was needed now, as Russia’s threats were a “risk for the whole planet”. Moscow, he claimed, had “made a step already” by occupying the Zaporizhzhia nuclear power plant, Europe’s largest nuclear station which President Putin is trying to turn into Russian property.

Around 500 Russian troops were at the plant, he said, although the Ukrainian staff still operate it.

“The world can stop urgently the actions of Russian occupiers,” President Zelensky said. “The world can implement the sanction package in such cases and do everything to make them leave the nuclear power plant.”

Empowered by sophisticated Western-supplied weapons, the Ukrainian army has made significant advances in the east and the south, reclaiming towns and villages even in areas the Kremlin claims are now part of Russia.

President Zelensky said Russian forces were putting up a “good enough fight”, but that Ukraine had received weapons – “I won’t say we have enough now” – and soldiers were motivated to push forward.

The Russian military’s setbacks, a major embarrassment for President Putin, have sparked unusual criticism of the country’s military.

Amid the losses, President Putin announced the mobilisation of hundreds of thousands of reservists, which led to rare anti-war protests in Russia and to a huge exodus of military-age men.

President Zelensky urged Russians to “fight for your body, rights and soul”, saying: “Those mobilised kids now, they come with nothing. Without guns or armour. They are being thrown here like cannon fodder… If they want to be kebabs – fine, let them come. But if they are people after all and think that this is their lives, they have to fight.

“Everything Putin is afraid of, and it’s not the nuclear hit, he is afraid of his community,” he said. He’s afraid of his people. Because only those people are capable of replacing him nowadays. Take away his power. Give it to someone else.”

Asked whether President Putin could survive in an eventual Ukrainian win in the war, he said: “I don’t care.”

DISCLAIMER: The Views, Comments, Opinions, Contributions and Statements made by Readers and Contributors on this platform do not necessarily represent the views or policy of Multimedia Group Limited.
Tags:
President Volodymyr Zelensky
Russia
Ukraine War