The UN says one of its cargo helicopters has crashed in South Sudan, with unconfirmed reports saying it was shot down.

Three crew died, while one survived, said the UN mission in South Sudan, adding that an inquiry was under way.

A UN official told the AP news agency the Mi-8 helicopter had apparently been shot down.

Thousands of people have been killed this year in bitter fighting between South Sudan's army and rebel forces.

Bentiu, capital of the oil-rich Unity state, has changed hands several times but a ceasefire agreement is currently in place. 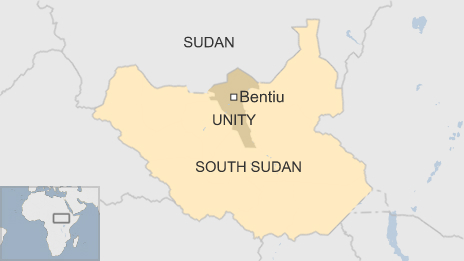 On Monday, the two sides were given 45 days to form a power-sharing government.

A government official has accused forces loyal to rebel commander Peter Gadet of shooting down the helicopter, AP reports. His forces have not yet commented.

The UN plays a vital role in getting food to the 1.8 million people who have fled their homes since fighting broke out last December.

Many have sought shelter in UN bases around the country, including Bentiu.