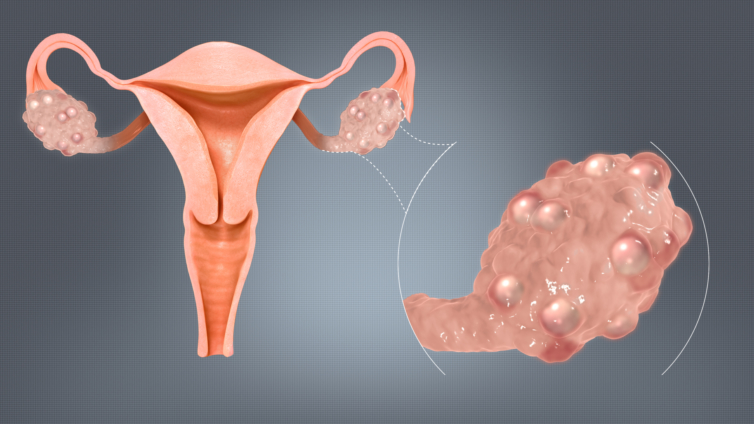 All around the world, one of the main issues that make couples visit the fertility clinic is polycystic ovarian syndrome (PCOS).

It accounts for about fifteen percent (15%) of all cases of infertility-related issues. It can happen any time; after menarche, ranging between 15 to 44 years in most cases.

Fertility is the main issue that lingers on the minds of anyone who hears the name ‘PCOS’, but this condition has a cross-cutting effect on other areas such as mental health and a risk factor for a number of non-communicable diseases.

Still in the month and wave of awareness creation for this syndrome, let us delve straight into the causes and its associated effects.

PCOS is ‘idiopathic’ meaning there is no known cause. However, researchers and medical practitioners say it has a genetic association with chromosome 15. It is also familial because it can be transferred from one generation unto another. It comes as no surprise that biological sisters have PCOS even if they are not twins. Twinning increases the chances more than the average population.

In the same vein, and I state emphatically that the fact that a biological mother or sister has PCOS does not necessarily indicate that you are definitely next in line to be diagnosed of the condition. It simply means you should visit the gynecologist if you have the symptoms mentioned in the subsequent paragraphs because PCOS may be lurking. People with PCOS can have children of their own. Infertility caused by PCOS is reversible and manageable.

Researches over the last decade assert that it is also linked to insulin resistance. Insulin is one of the main hormones that controls our blood sugar levels. This is why PCOS is a risk factor of diabetes – a good number of females with PCOS develop diabetes after some time.

No one symptom vividly points out PCOS. A number of symptoms must be present to give you the high index of suspicion that PCOS is knocking at the door. These include menstrual irregularities, difficulty to conceive a child, unintentional weight gain, acne and hirsutism (growth of thick dark hair on the face, chest, limbs and back).

The Psychological Aspect of PCOS

Often going unnoticed is the psychological blow PCOS comes with. Males at puberty start developing facial hairs; from the side burns, to the beard, to the moustache and soul patch. This is what we have grown with. It is even an issue when a male for some time fails to develop these hairs.

The African society is gender dysphoric and as such is not used to changes seen on a man and vice versa and in this case not pleased with women with excessive facial hair growth. You often hear statements like “hwε, barima na ͻreba no” meaning “look at the man coming” knowing very well it is a female. These and many more of such statements are unhealthy and does not allow women with this condition to be socially- accepted. Let us be supportive as a society.

Some have acne (facial breakouts) so bad that it dissipates self-confidence. I seize this opportunity to bring to the public that these women need support emotionally and psychologically. You do not want to ridicule people going through the hard time of dealing with infertility, facial breakouts and deflated confidence associated with this condition.

How infertility is caused by PCOS

Infertility is simply the inability to conceive after one year of constant unprotected sex. In the case of PCOS, the main issues hampering the capacity to be pregnant is difficulties in ovulation due to hormonal imbalances.

Every month in the reproductive life of a woman, she releases eggs in anticipation for a sperm to be released through sex to achieve pregnancy. Spontaneously and unpredictably in the PCOS, certain months may be ovulation-free. Your guess is as good as mine that when sexual intercourse takes place during these month of no show (no ovulation), then pregnancy will not occur.

Is there a cure?

There is not any. It can be controlled with the right treatment at many fertility clinics across the country, depending on the symptoms, but it cannot be cured. It can be managed to improve a woman with the condition’s appearance and chances of conceiving. Acne can be taken care off by a dermatologist.

When to see the doctor

Regular medical checkups cannot be underestimated. Menstrual irregularities, infertility issues and unusual symptoms should prompt you to see the gynaecologist.

Thanks for reading. Have a lovely day.