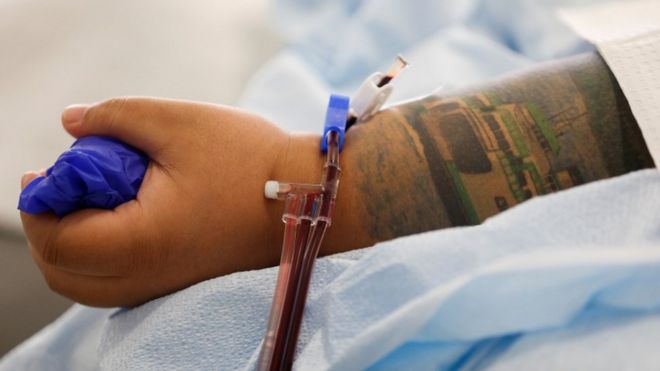 The US Food and Drug Administration (FDA) has given emergency authorisation for the use of plasma to treat coronavirus patients.

The technique uses antibody-rich blood plasma from people who’ve recovered from the disease, and has already been used on over 70,000 people in the US.

The FDA says early trials indicate it is safe, although more are needed to prove effectiveness.

Several experts have questioned the robustness of studies into its use.

The announcement came a day after President Donald Trump accused the FDA of impeding the rollout of vaccines and therapeutics for political reasons, and on the eve of the Republican National Convention, where Mr Trump will launch his campaign to win a second term in the White House.

The BBC reports that Dr. Fauci has “expressed reservations” about the robustness of plasma studies so far.https://t.co/aLE27M1G8D

“This is what I’ve been looking forward to doing for a long time,” the president told reporters on Sunday.

“I’m pleased to make a truly historic announcement in our battle against the China virus that will save countless lives.”

Mr Trump described the procedure as a powerful therapy, as he appealed for Americans to come forward to donate plasma if they’d recovered from Covid-19.

More than 176,000 people have died from coronavirus since the start of the outbreak in the United States, according to a tally by Johns Hopkins University. Nearly 5.7 million cases have also been confirmed nationwide. The country has had more confirmed cases and deaths than anywhere else in the world.

The FDA had already approved the use of plasma transfusions on coronavirus patients under certain conditions, like those who are gravely ill or taking part in clinical trials.

It has now given the treatment “emergency use authorisation”, rather than full approval, saying that early research suggests blood plasma can decrease mortality and improve patient health if it’s administered within the first three days of being admitted to hospital. However, more trials are needed to prove its effectiveness.

The agency said it concluded it was safe after reviewing the results of 20,000 patients who had received the treatment so far.

“It appeared that the product is safe and we’re comfortable with that and we continue to see no concerning safety signals,” said Peter Marks, director of the FDA’s Center for Biologics Evaluation and Research.

In his own comments, Mr Trump removed the FDA’s nuanced language, saying the plasma treatment had been “proven to reduce mortality by 35%”.

Several experts, including Dr Anthony Fauci, a member of the White House’s coronavirus task force, have expressed reservations about the robustness of studies so far.

Many countries are using plasma as a coronavirus therapy, but it’s not yet clear how effective the treatment is.

The decision by the US Food and Drug Administration to grant emergency use is a balance of risks.

It says, based on the evidence so far, convalescent plasma may lessen the severity or shorten the length of Covid-19 illness.

Certainly, sick coronavirus patients whose own immune systems are struggling to fight off the pandemic virus might get protection from a transfusion of antibody-rich plasma from someone who has successfully recovered from Covid-19.

Convalescent plasma has been used to successfully treat other diseases, including Ebola.

It is generally well-tolerated, but unwanted effects can occur, including harmful allergic reactions.

A recent UK analysis said it remained “very uncertain” whether plasma was beneficial for people admitted to hospital with Covid-19.

Trials are ongoing to understand precisely which patients might benefit and by how much.

In a statement, the Infectious Diseases Society of America said that while there were “some positive signals that convalescent plasma can be helpful in treating individuals with Covid-19…. we lack the randomized controlled trial data we need to better understand its utility in Covid-19 treatment”.

Jonathan Reiner, a professor of medicine at George Washington University, called it “a political stunt”.

“Convalescent plasma may have some efficacy, but we need to have definitive data,” he wrote on Twitter.

The World Health Organization last month said that “Covid-19 convalescent plasma can be made available on an experimental basis through local production provided that ethical and safety criteria are met for its preparation and use”.

What’s the latest on vaccines?

In a tweet on Saturday, President Trump said “the deep state, or whoever, at the FDA is making it very difficult for drug companies to get people in order to test the vaccines and therapeutics.

“Obviously, they are hoping to delay the answer until after [the US presidential election],” he added.

Earlier this year, US regulators gave emergency authorisation to Gilead Science Inc’s remdesivir as a therapeutic treatment for coronavirus.

Meanwhile, a report by the Financial Times suggests the White House is considering granting emergency authorisation for a vaccine being developed by Oxford University and pharmaceutical giant AstraZeneca, ahead of the US presidential election on 3 November.

The White House has not commented on the story, but a spokesperson for AstraZeneca told Reuters that efficacy results for its trials were not expected until later this year.

DISCLAIMER: The Views, Comments, Opinions, Contributions and Statements made by Readers and Contributors on this platform do not necessarily represent the views or policy of Multimedia Group Limited.
Tags:
Blood Plasma Treatment
Covid-19
Trump
US FDA