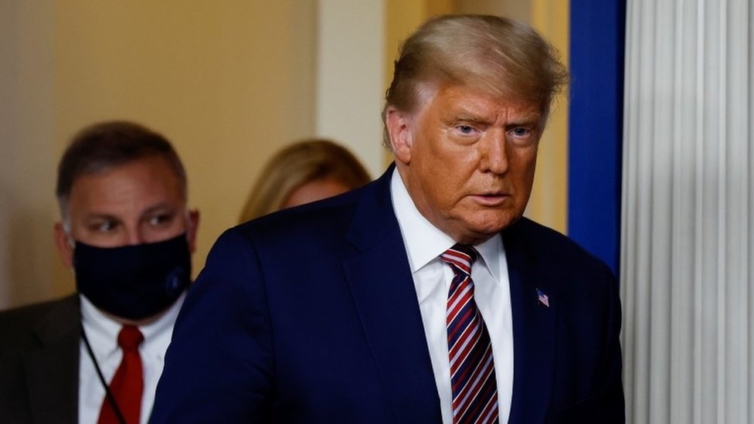 US President Donald Trump has accused Democrats of voting “shenanigans” as the result from Tuesday’s White House election hangs in the balance.

His Democratic challenger Joe Biden earlier appealed for calm as the nail-biting count drags on in five states.

While clinging to wafer-thin leads in Nevada and Arizona, Mr Biden has been chewing into the Republican president’s edge in Pennsylvania and Georgia.

The cliff-hanger follows one of the bitterest campaigns in living memory.

The election is projected to have generated the highest turnout since 1900. Mr Biden has so far pulled in well over 73 million votes, the most ever for a US presidential candidate. Mr Trump has drawn almost 70 million, the second-highest tally in history.

What did Trump say?

In his first public remarks since appearing at the White House in the early hours of Wednesday, the president said: “If you count the legal votes, I easily win.

“If you count the illegal votes they can try to steal the election from us.”

Beyond allegations of irregularities, the Trump campaign has not presented any evidence of election fraud.

Speaking from the White House on Thursday, the president added: “We were winning in all the key locations, by a lot actually, and then our numbers started getting miraculously whittled away in secret and they wouldn’t allow legally permissible observers.”

Mr Trump’s critics have pointed out his lead is being cut into because he actively discouraged his supporters from voting by mail, while Mr Biden urged his voters to use postal ballots, and it is these votes that are now being tallied in the key states.

The president added: “There’s been a lot of shenanigans and we can’t stand for that in our country.”

Some fellow Republicans who have in the past raised rare dissent against the president implicitly criticised his latest remarks.

Mitt Romney, the Utah senator who lost as the Republican presidential nominee in 2012, said: “The votes will be counted. If there are irregularities alleged, they will be investigated and ultimately resolved in the courts.

“Have faith in our democracy, in our Constitution, and in the American people.”

Also without naming the president, Illinois congressman Adam Kinzinger said: “If you have legit concerns about fraud present evidence and take it to court. Stop spreading debunked misinformation… This is getting insane.”

Maryland Governor Larry Hogan was more forthright in his criticism. “There is no defence for the President’s comments tonight,” he tweeted, “undermining our Democratic process.”

But just-re-elected Georgia Senator David Perdue tweeted that “every lawful vote cast should be counted, once”, and then the president would win.

What did Biden say?

Earlier on Thursday, speaking from his campaign headquarters in Wilmington, Delaware, Mr Biden appealed for calm across the country.

In a brief televised address, the Democratic challenger again expressed confidence he would be declared the winner.

“Democracy is sometimes messy,” he said. “It sometimes requires a little patience as well.

“But that patience has been rewarded now for more than 240 years, the system of governance that has been the envy of the world.”

As results gradually trickle in, protests involving both sides have been held in major cities over the vote counting.

Donald Trump took to the White House press room on Thursday night in an attempt to project strength, but his comments belied the weakness of his current electoral position.

He focused on states he had won. And he talked about the leads he’d had in key swing states on Tuesday night, claiming without substantiation that they were being taken away from him now by fraud.

It was an acknowledgement, however, that those leads are vanishing – and could be gone soon.

He lashed out at pollsters, ballot-counters and Democrats and promised a flurry of lawsuits, although he presented no evidence of electoral misconduct.

He claimed ballots were being counted without observers (even though they are) and attributed the late surge by Mr Biden in mail balloting to fraud (it isn’t).

Already Republican officeholders are distancing themselves from Mr Trump’s remarks, perhaps wary of tying themselves too closely to a man could be on the precipice of defeat.

What’s the current state of the race?

Mr Biden has since been declared the winner of Michigan and likely Wisconsin, while nail-biting vote counts involving razor-thin margins have kept America on edge in the other five states.

Mr Biden now has 253 electoral college votes in the race to accumulate the 270 needed to win the White House under the state-by-state US election system. Mr Trump has 214.

A win in just Pennsylvania or two of the other four remaining states would be enough to confirm Mr Biden as president-elect, barring any legal challenge.

A senior Trump administration official told the BBC’s US partner CBS News that Mr Trump did not plan to concede if Mr Biden ultimately declared victory.

Mr Trump’s team has raised millions of dollars for litigation.

Former White House chief of staff Mick Mulvaney, meanwhile, predicted in a webinar hosted by a think tank earlier on Thursday that Mr Trump would “absolutely” run for president again in 2024 if he lost to Mr Biden.

What’s the latest on counting?

Elections officials have also been calling for patience.

Pennsylvania Secretary of State Kathy Boockvar told a press conference that most ballots would be counted by Friday, but the race was still too tight to declare a result.

“It’s very close in Pennsylvania, right, there’s no question,” she said on Thursday. “That means it’s going to take longer to see who the winner is.”

Mr Trump was leading in Pennsylvania by just over 42,000 votes with 95% of ballots tallied.

Gabriel Sterling, a spokesman for Georgia’s Secretary of State, said he had seen no evidence of voter fraud, adding that election officials were “doing extremely well” under pressure.

In Arizona, Mr Biden’s lead was steadily eroding and was at about 46,000 votes with 91% of votes tallied.

CBS has categorised it as a “likely” win for the Democrat. Supporters of Mr Trump gathered on Thursday outside a vote-counting centre in Maricopa County.

In Nevada, Mr Biden had an edge of more than 11,000 over Mr Trump. An election official there said the results from more than 51,000 postal ballots would be updated on Friday.

DISCLAIMER: The Views, Comments, Opinions, Contributions and Statements made by Readers and Contributors on this platform do not necessarily represent the views or policy of Multimedia Group Limited.
Tags:
Biden
Trump
US election 2020