US election fallout: Baseball bats and shanks on display as Trump supporters and opponents clash after Million Maga March 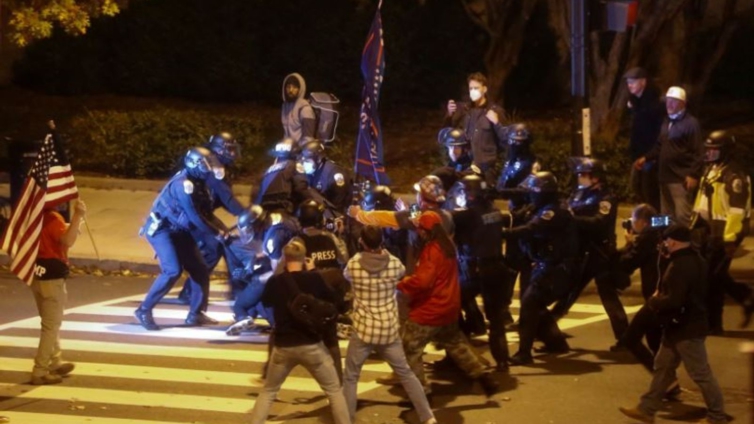 The tension of a contested election has been building for days and finally the two sides of a divided America squared off.

They came head-to-head outside The Supreme Court in Washington DC in the afternoon on Saturday.

By dusk, both sides moved into town, some armed with baseball bats, shanks and up for a fight.

One of the Proud Boys, a far-right group supportive of Trump, was surrounded and attacked – a punch to the nose floored him.

I saw another Antifa member pull boxing gloves out of his rucksack and challenge one to a fight. The police intervened.Advertisement

Donald Trump encouraged his supporters to turn out and he drove past the crowds on the way to his golf course.

He has energised them over Twitter by making repeated claims of election fraud, none of which have been proven true.

Into the evening, both sides forced the police into running battles around the capital.

Posters at the Black Lives Matter plaza were torn down and Trump supporters were attacked in bars and hotels.

The Proud Boys carried out initiation rituals for new members beneath the Washington Monument and then roamed around the streets looking for Antifa.

One person was stabbed, we saw others injured.

All night the centre of the capital was locked down as police tried to control the two groups – they did well, avoiding the use of tear gas and remained restrained.

By 2am, fourteen hours after it started, the sides dispersed.

Twelve days after the election, politics has moved from the ballot box and onto the street.

DISCLAIMER: The Views, Comments, Opinions, Contributions and Statements made by Readers and Contributors on this platform do not necessarily represent the views or policy of Multimedia Group Limited.
Tags:
Baseball
opponents
supporters
Trump
US election fallout