US gun control: Biden calls for a ban on assault weapons 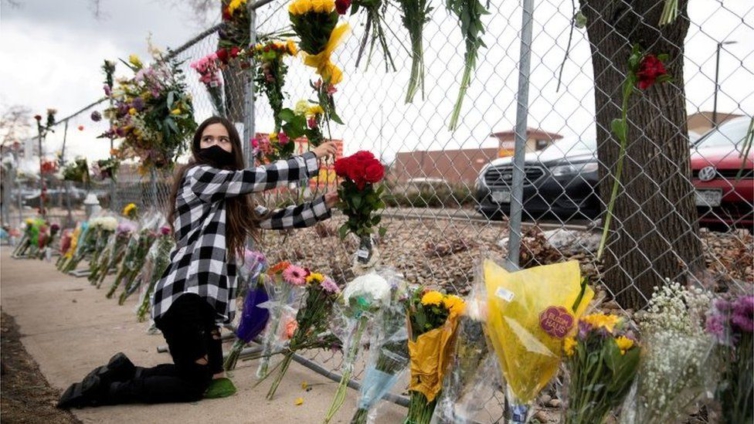 Ten people were killed at a supermarket in Colorado on Monday

President Joe Biden has vowed to take “common-sense steps” to crack down on firearms following two mass shootings in the US in less than a week.

He renewed his call to ban assault weapons and high-capacity magazines and urged Congress to pass bills that would end loopholes in background checks.

Mr Biden was speaking a day after 10 people were shot dead in a Colorado grocery store. Eight people were killed inside spas in Georgia last week.

But the president has an uphill task.

The right to bear arms is protected by the Second Amendment to the US Constitution.

While Democrats have called for stricter gun control measures in the aftermath of mass shootings, many conservatives, including former President Donald Trump, see any restrictions as infringing on this constitutional right.

‘Should not be a partisan issue’

“I don’t need to wait another minute, let alone an hour, to take common-sense steps that will save the lives in the future, and to urge my colleagues in the House and Senate to act,” Mr Biden said at the White House on Tuesday.

He pointed to the fact that, as a senator, he helped bring in a ban on assault weapons in 1994, which expired a decade later. “It brought down these mass killings. We should do it again,” he said.

“This is not and should not be a partisan issue. This is an American issue. It will save lives. American lives. And we have to act,” he said.

Mr Biden urged the Senate to approve two pieces of legislation passed by the House of Representatives, which are aimed at expanding and strengthening background checks on gun buyers.

But Senate Republican leader Mitch McConnell said that while they were “open to the discussion”, Republicans in the chamber were not in favour of the two measures.

“One thing we do know for sure is that these shooters are invariably mentally incapacitated,” he said. “This is a vexing problem that is extremely hard to identify in advance.”

The US Senate is currently split 50-50 between Democrats and Republicans, with the vice-president holding the casting vote. However, because of Senate rules (known as the “filibuster”), in practice 60 votes are needed to get legislation through, so some Republican support is required.

White House spokeswoman Jen Psaki told reporters the president was “considering a range” of executive measures to tackle gun violence that would not need the approval of Congress. She did not specify what action he might take.